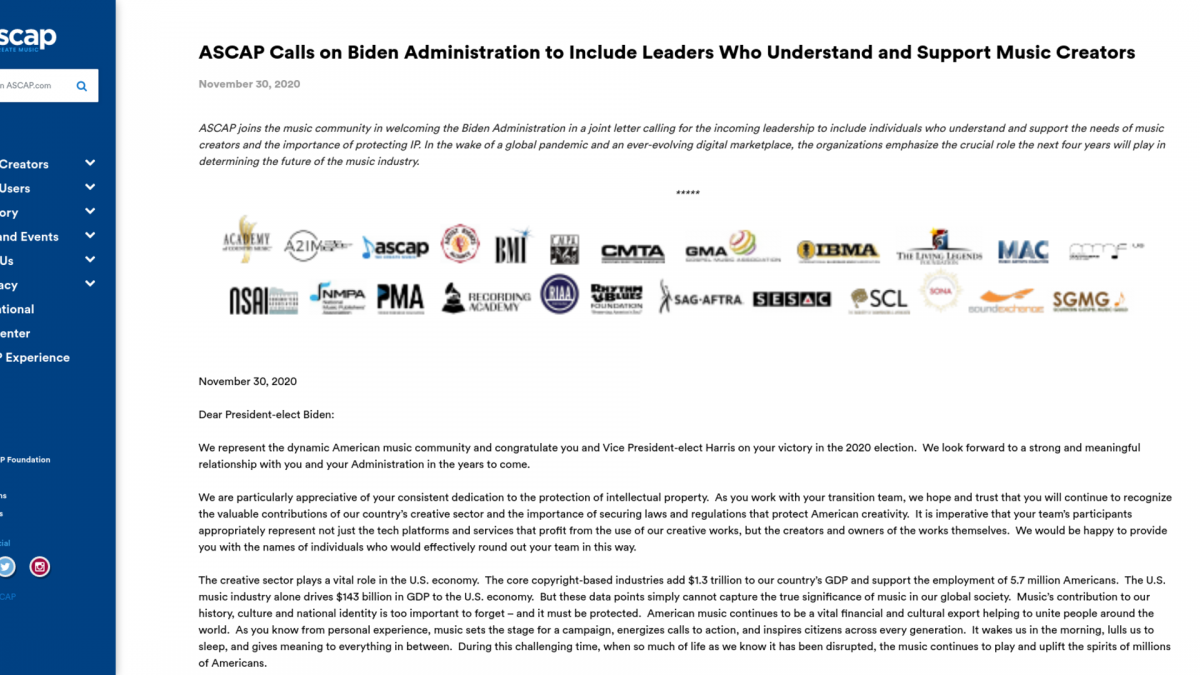 ASCAP joins the music community in welcoming the Biden Administration in a joint letter calling for the incoming leadership to include individuals who understand and support the needs of music creators and the importance of protecting IP. In the wake of a global pandemic and an ever-evolving digital marketplace, the organizations emphasize the crucial role the next four years will play in determining the future of the music industry. 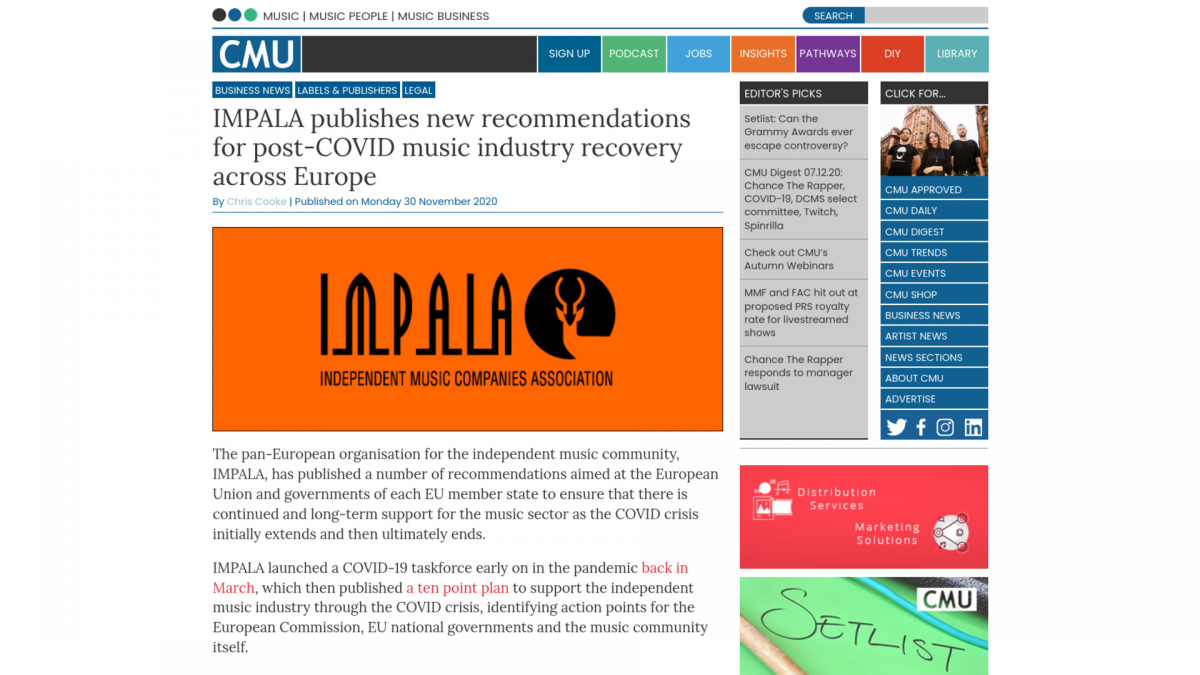 The pan-European organisation for the independent music community, IMPALA, has published a number of recommendations aimed at the European Union and governments of each EU member state to ensure that there is continued and long-term support for the music sector as the COVID crisis initially extends and then ultimately ends.

European Union lawmakers are considering whether current rules aimed at limiting the practice of geoblocking across the bloc should be extended to cover access to streaming audio-visual content. 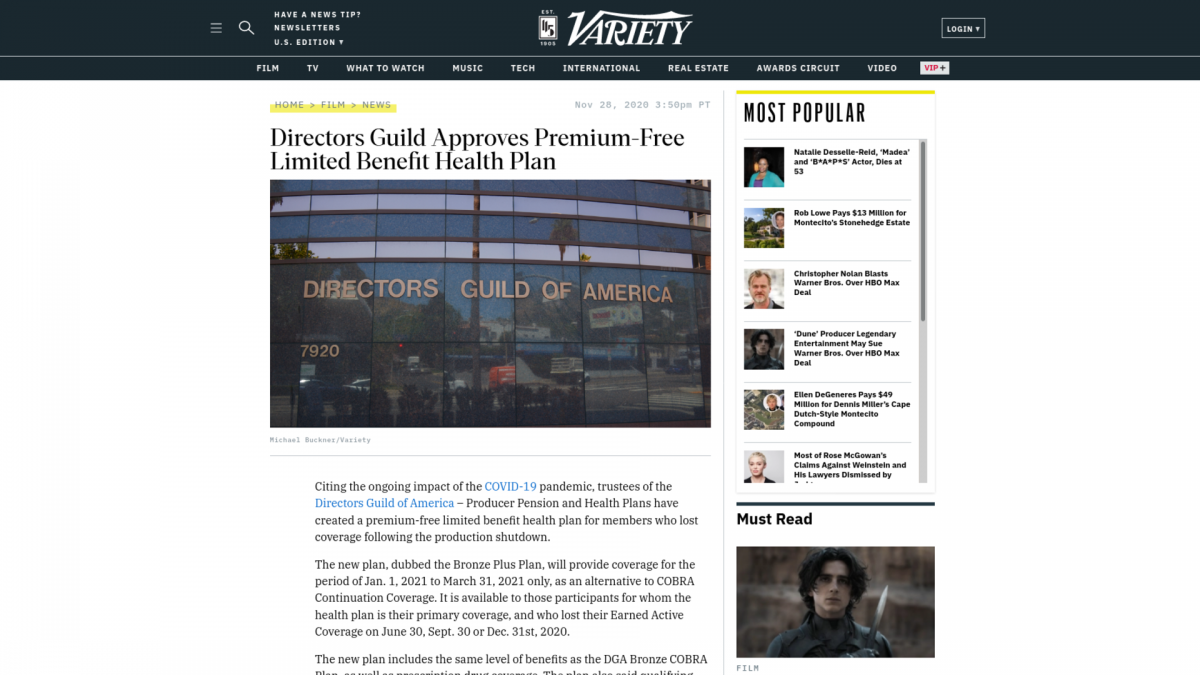 Citing the ongoing impact of the COVID-19 pandemic, trustees of the Directors Guild of America – Producer Pension and Health Plans have created a premium-free limited benefit health plan for members who lost coverage following the production shutdown. 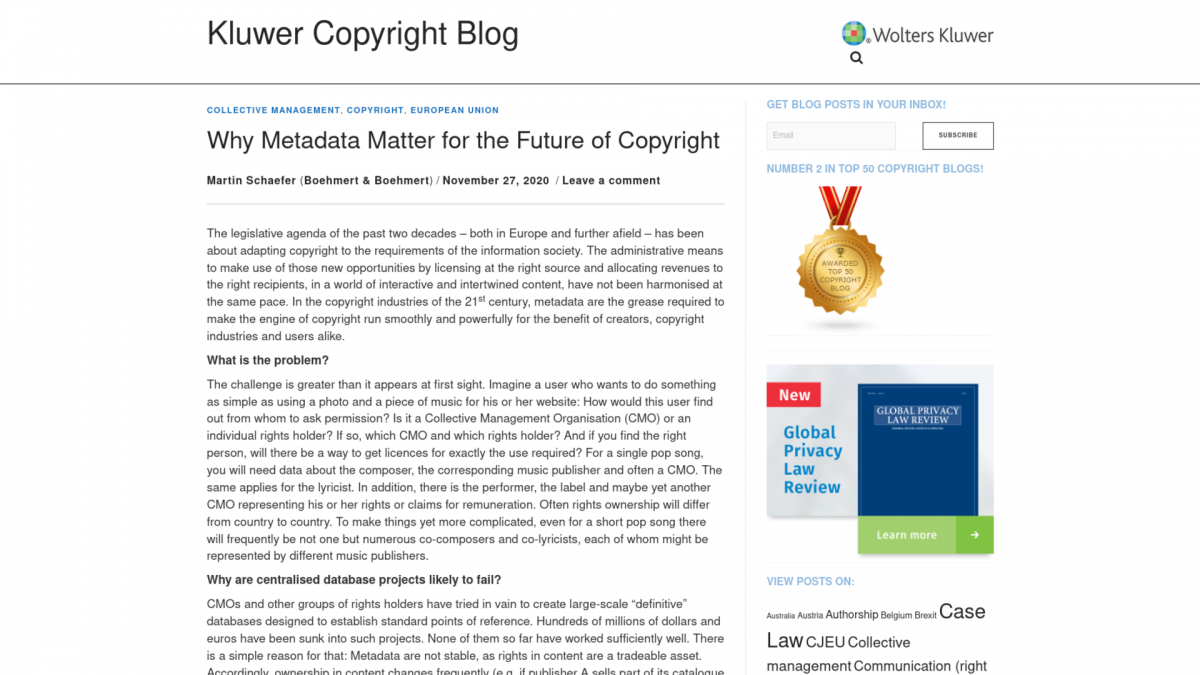 The legislative agenda of the past two decades – both in Europe and further afield – has been about adapting copyright to the requirements of the information society. The administrative means to make use of those new opportunities by licensing at the right source and allocating revenues to the right recipients, in a world of interactive and intertwined content, have not been harmonised at the same pace. In the copyright industries of the 21st century, metadata are the grease required to make the engine of copyright run smoothly and powerfully for the benefit of creators, copyright industries and users alike. 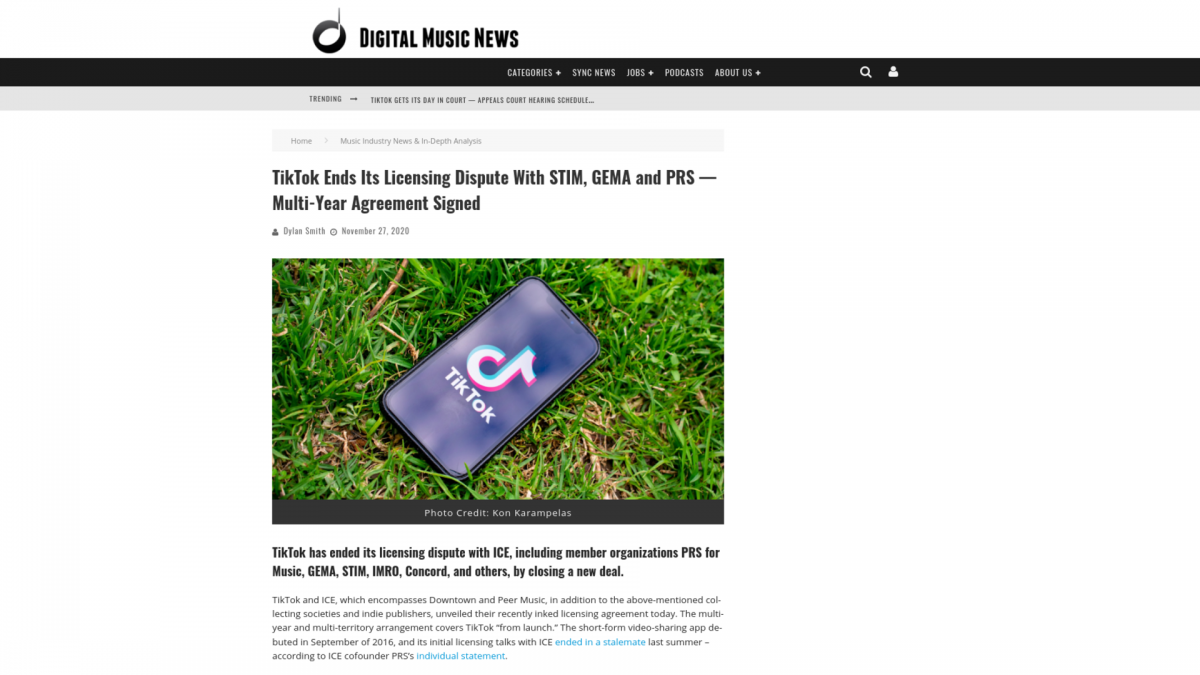 TikTok and ICE, which encompasses Downtown and Peer Music, in addition to the above-mentioned collecting societies and indie publishers, unveiled their recently inked licensing agreement today. The multi-year and multi-territory arrangement covers TikTok “from launch.” The short-form video-sharing app debuted in September of 2016, and its initial licensing talks with ICE ended in a stalemate last summer – according to ICE cofounder PRS’s individual statement.

MC5’s Wayne Kramer has sued Proctor & Gamble over its Old Spice Guitar Solo body wash, and not just because he’s offended as a guitarist at the idea of his artform being turned into soap. Rather, he’s suing because the illustrated musician that appeared on bottles of said body wash was playing a guitar that looks very like his signature stars and stripes stratocaster. 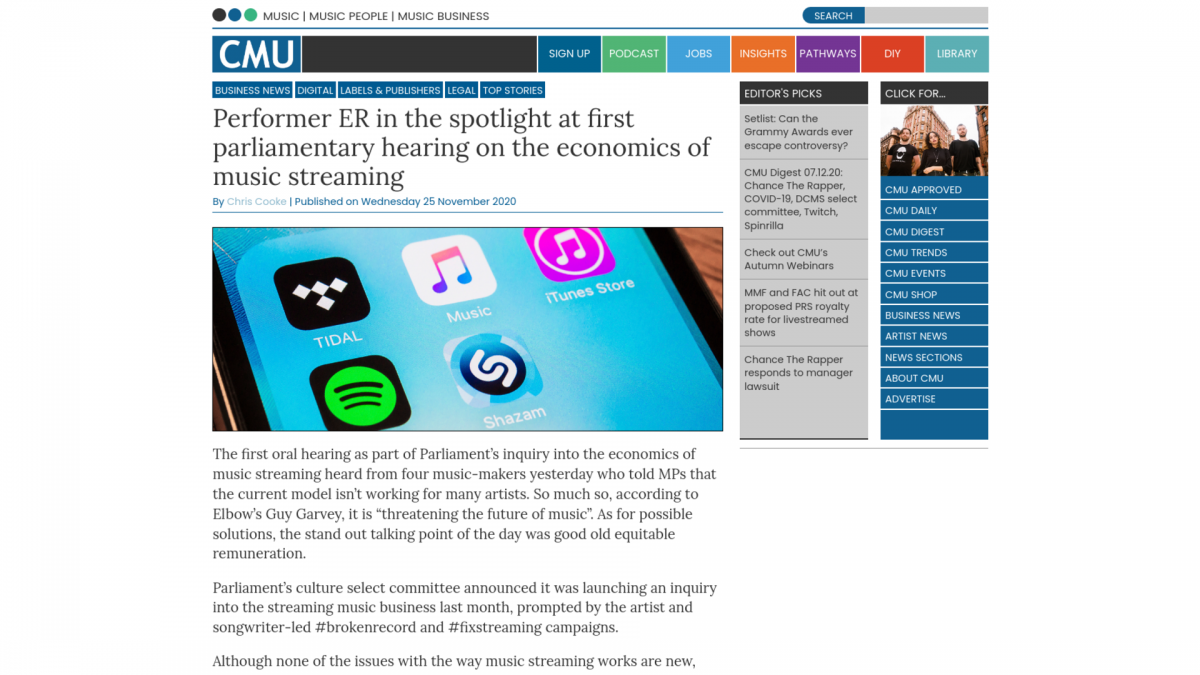 The first oral hearing as part of Parliament’s inquiry into the economics of music streaming heard from four music-makers yesterday who told MPs that the current model isn’t working for many artists. So much so, according to Elbow’s Guy Garvey, it is “threatening the future of music”. As for possible solutions, the stand out talking point of the day was good old equitable remuneration. 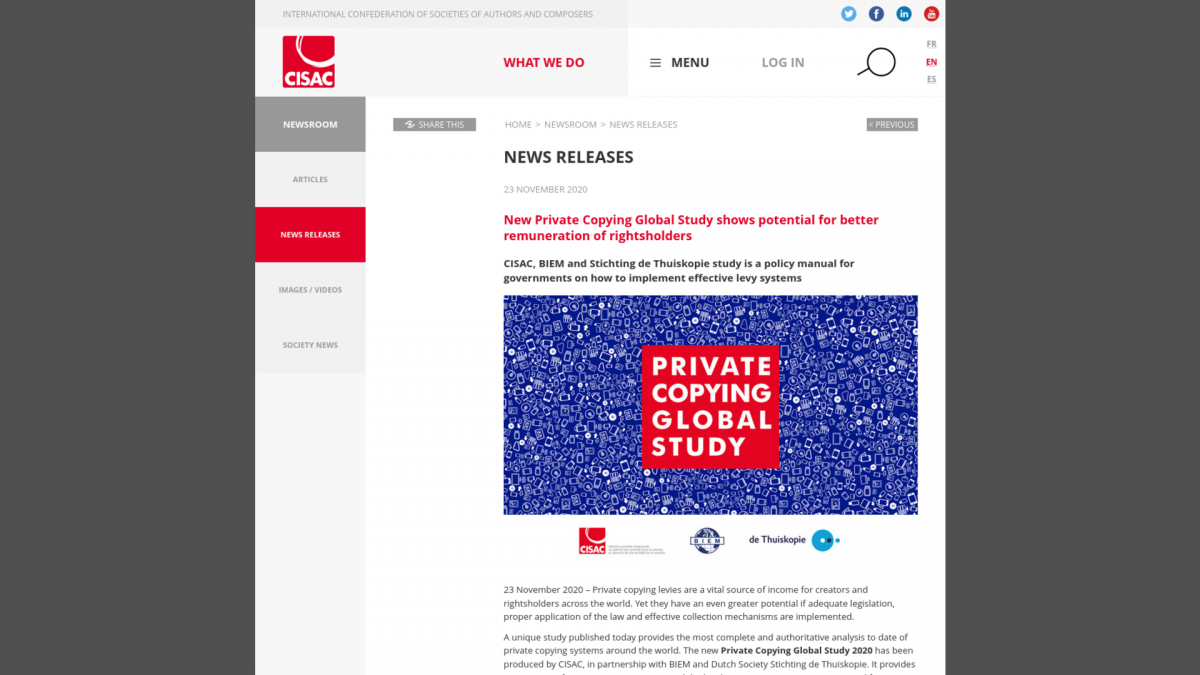 23 November 2020 – Private copying levies are a vital source of income for creators and rightsholders across the world. Yet they have an even greater potential if adequate legislation, proper application of the law and effective collection mechanisms are implemented.

Re: Summary of the November 13, 2020 Ex-Parte Meeting Between the United States Copyright Office on behalf of the following independent, US-based music creator organizations: the Songwriters Guild of America, Inc. (SGA), the Society of Composers & Lyricists (SCL), and Music Creators North America, Inc. (MCNA) 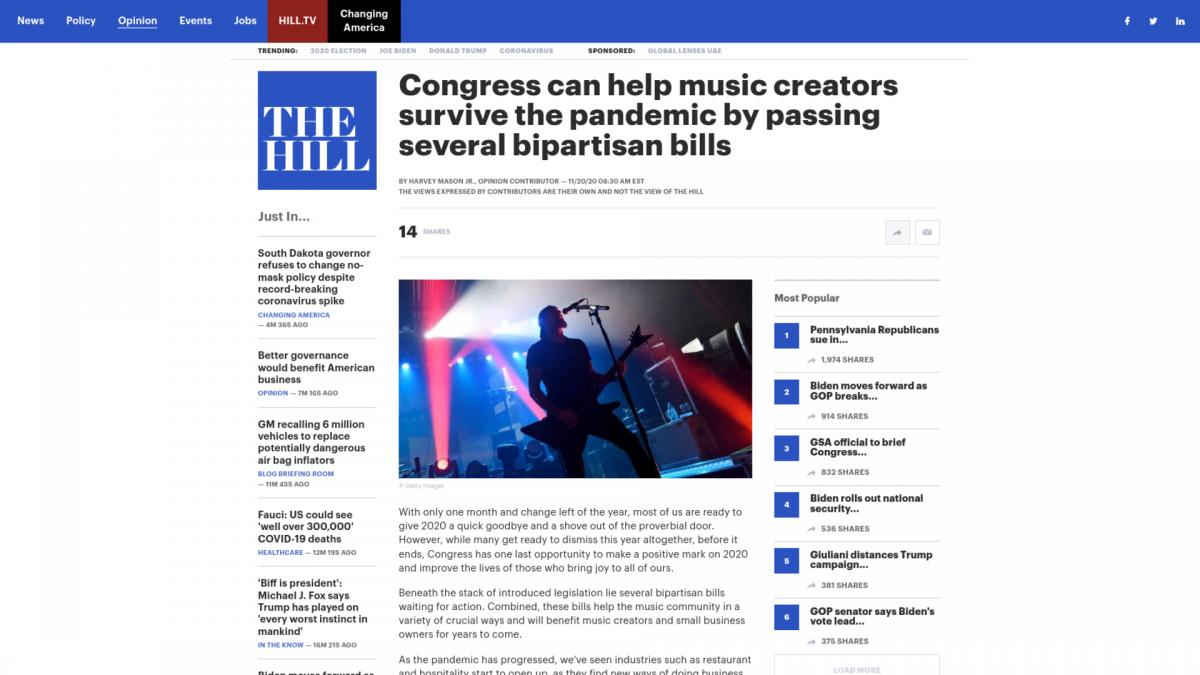 With only one month and change left of the year, most of us are ready to give 2020 a quick goodbye and a shove out of the proverbial door. However, while many get ready to dismiss this year altogether, before it ends, Congress has one last opportunity to make a positive mark on 2020 and improve the lives of those who bring joy to all of ours. 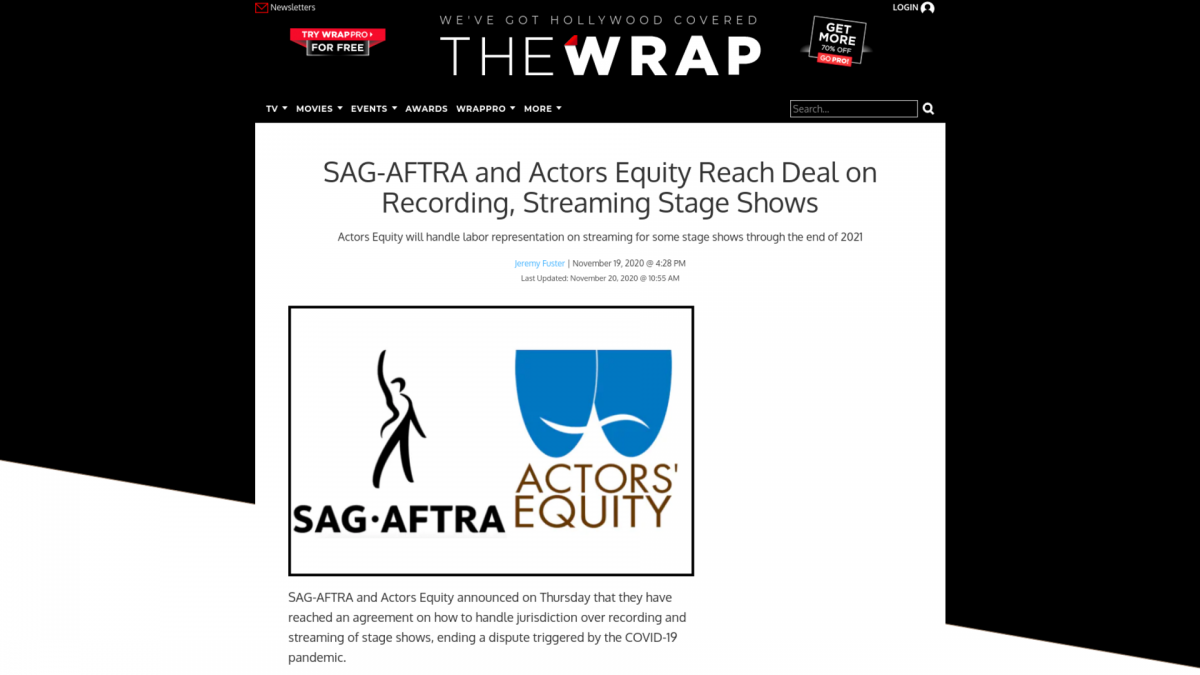 SAG-AFTRA and Actors Equity announced on Thursday that they have reached an agreement on how to handle jurisdiction over recording and streaming of stage shows, ending a dispute triggered by the COVID-19 pandemic. 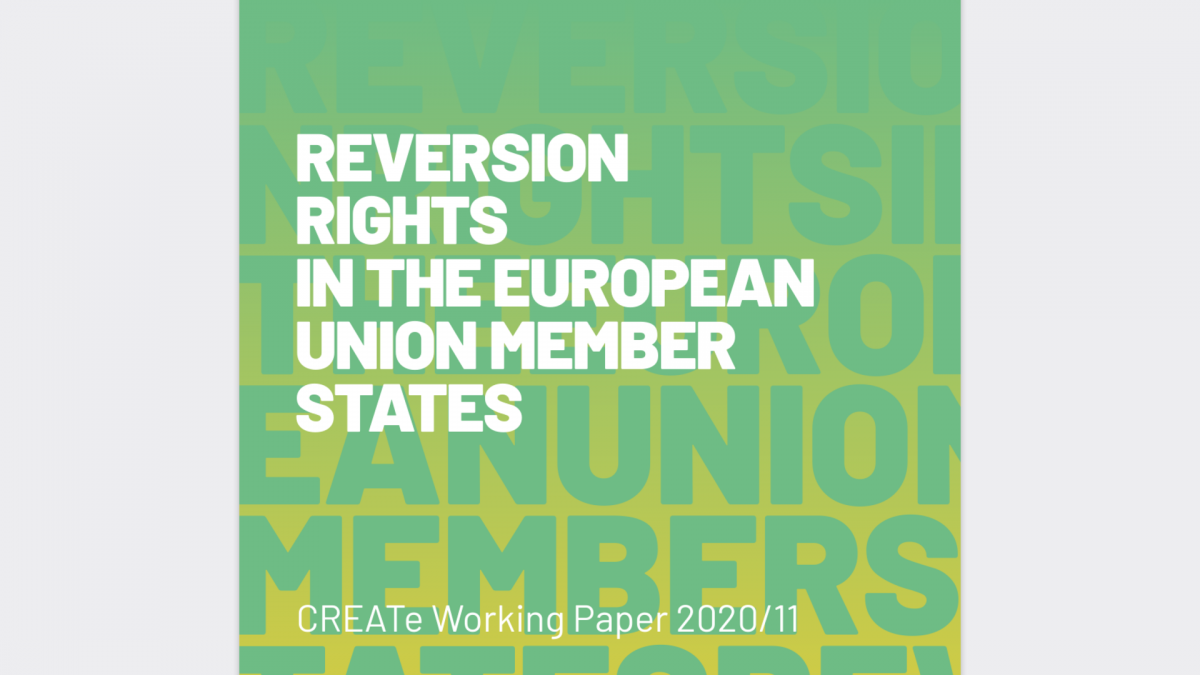 The working paper presents the results of the mapping of provisions allowing authors and performers to reclaim their rights (reversion rights) which are currently or were historically a part of the national laws of the European Union Member States. The mapping is a result of a collaborative project between CREATe (University of Glasgow) and IPRIA (University of Melbourne), with the reCreating Europe consortium. The impulse came from the introduction of the right of revocation in art. 22 of the 2019 Directive on Copyright in the Digital Single Market, a reversion right following a use-it-or-lose-it logic. 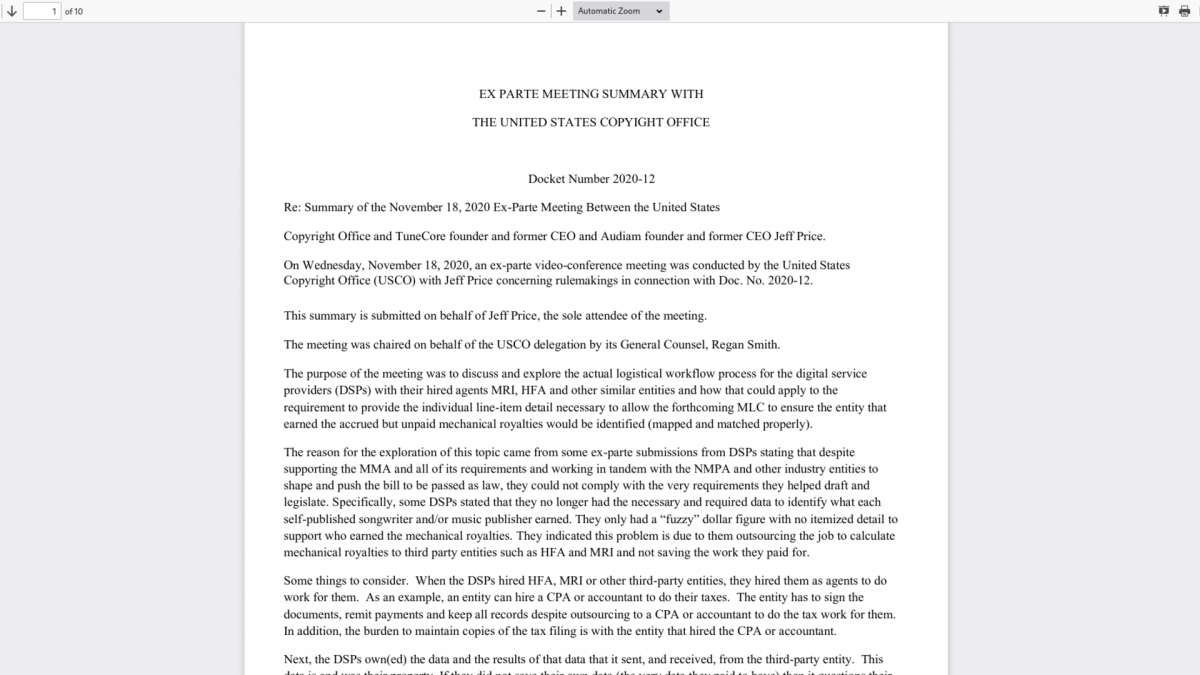 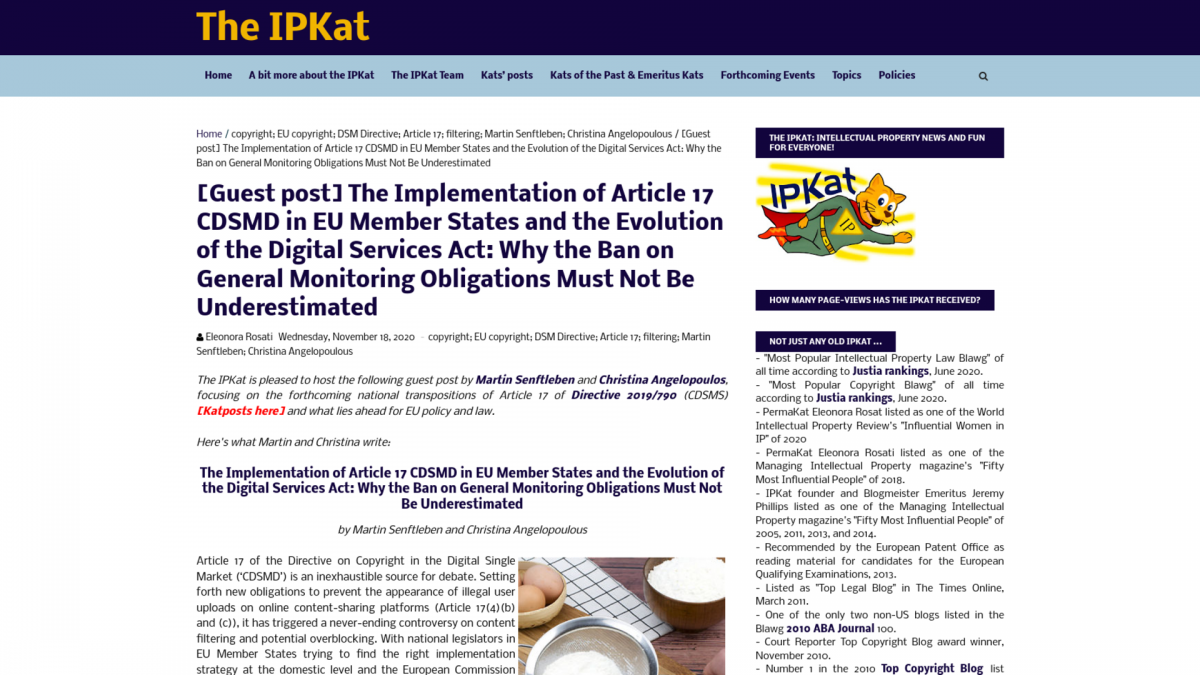 Article 17 of the Directive on Copyright in the Digital Single Market (‘CDSMD’) is an inexhaustible source for debate. Setting forth new obligations to prevent the appearance of illegal user uploads on online content-sharing platforms (Article 17(4)(b) and (c)), it has triggered a never-ending controversy on content filtering and potential overblocking. With national legislators in EU Member States trying to find the right implementation strategy at the domestic level and the European Commission working on a new architecture for internet service provider liability in the Digital Services Act (‘DSA’), the debate has reached a new peak. 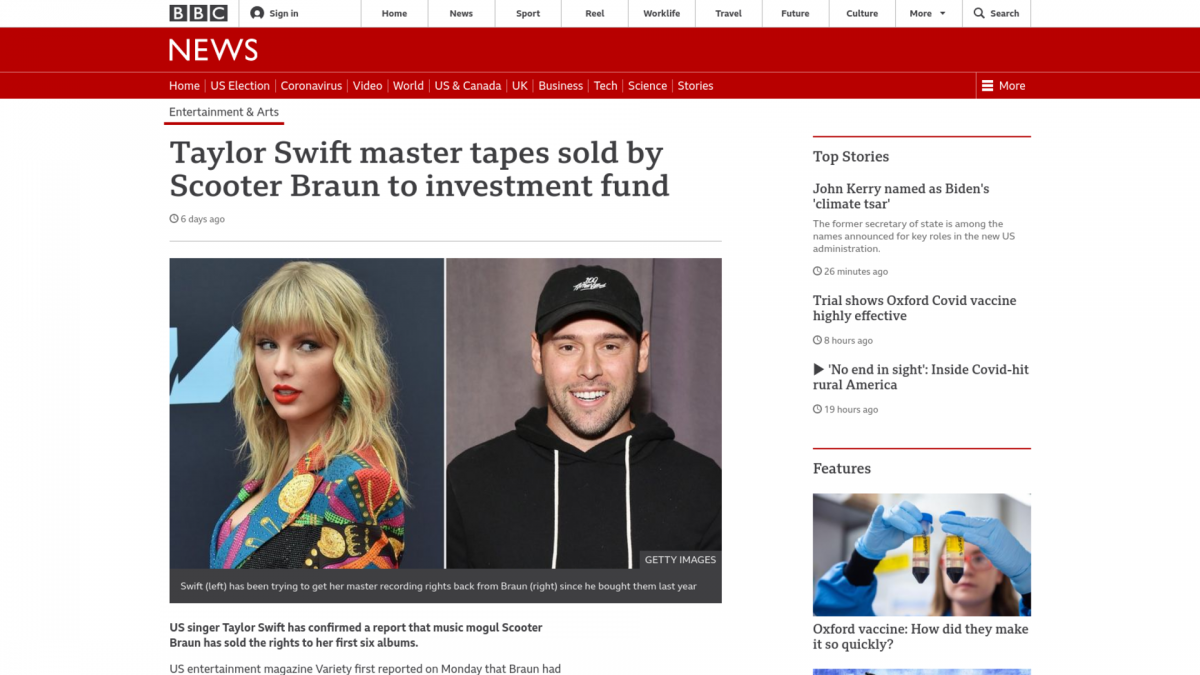 US singer Taylor Swift has confirmed a report that music mogul Scooter Braun has sold the rights to her first six albums.

US entertainment magazine Variety first reported on Monday that Braun had sold the recordings – known as masters – to an investment fund. 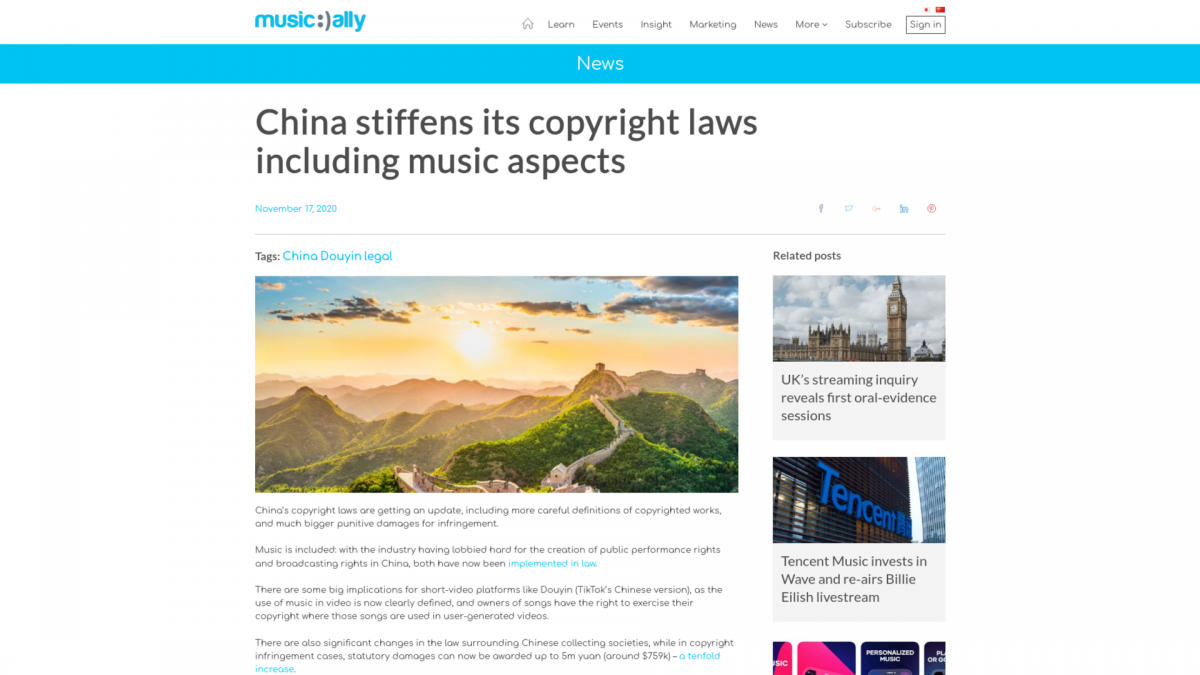 China’s copyright laws are getting an update, including more careful definitions of copyrighted works, and much bigger punitive damages for infringement.

The European Composer And Songwriter Alliance has hit out at Spotify’s recent announcement that it is piloting a new marketing service that will allow artists and labels to influence the algorithm that selects what music gets played via the streaming platform’s personalised radio and auto-play features. 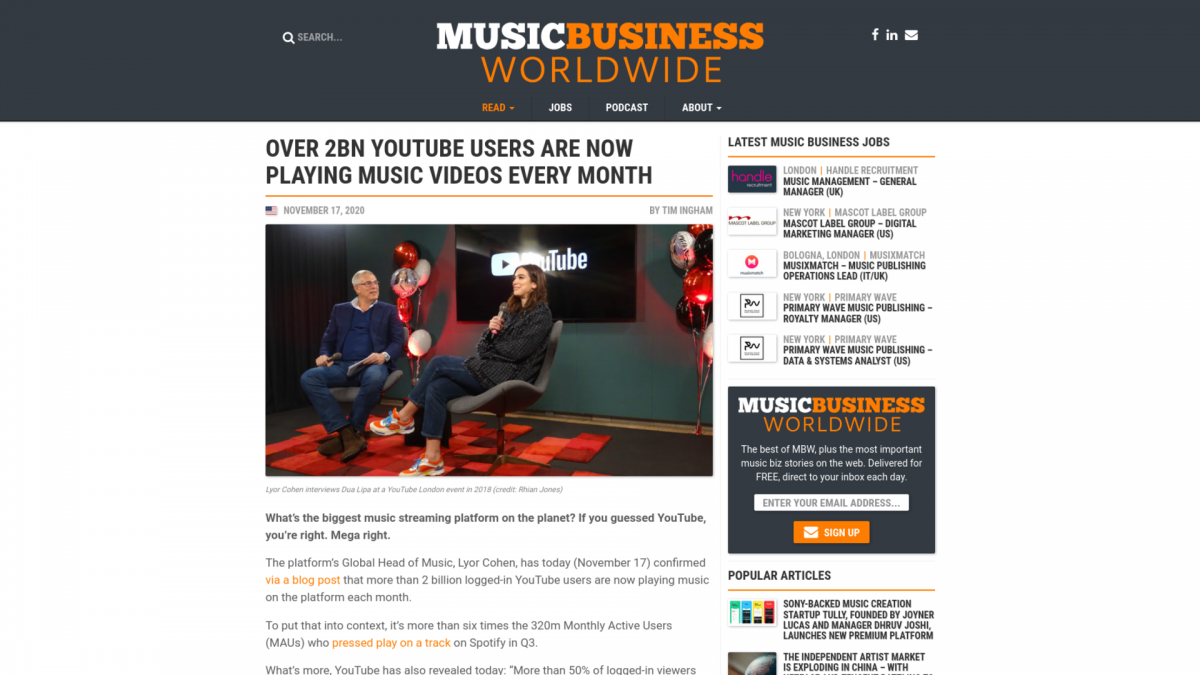 The platform’s Global Head of Music, Lyor Cohen, has today (November 17) confirmed via a blog post that more than 2 billion logged-in YouTube users are now playing music on the platform each month. 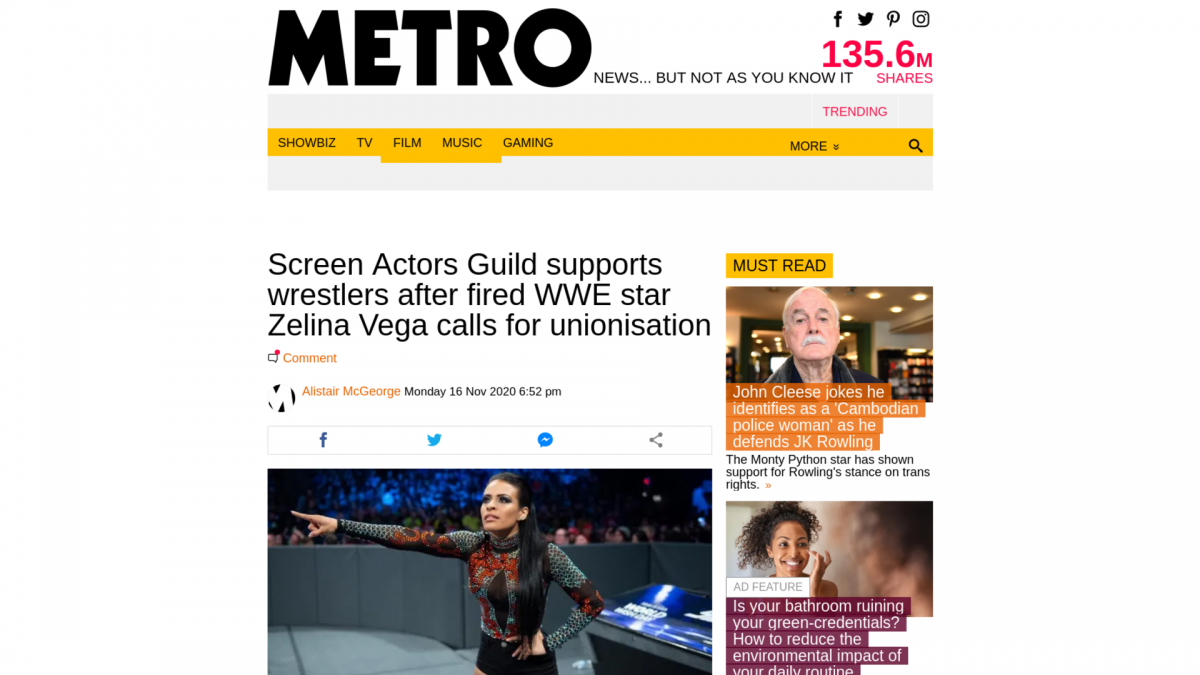 SAG-AFRTRA president Gabrielle Carteris has promised to ‘directly engage’ with pro wrestlers after calls for unionisation. Former WWE superstar Zelina Vega – whose release from the company over the weekend left fans stunned – made waves as she immediately tweeted her support for a union, which caught the eye of the Screen Actors Guild. 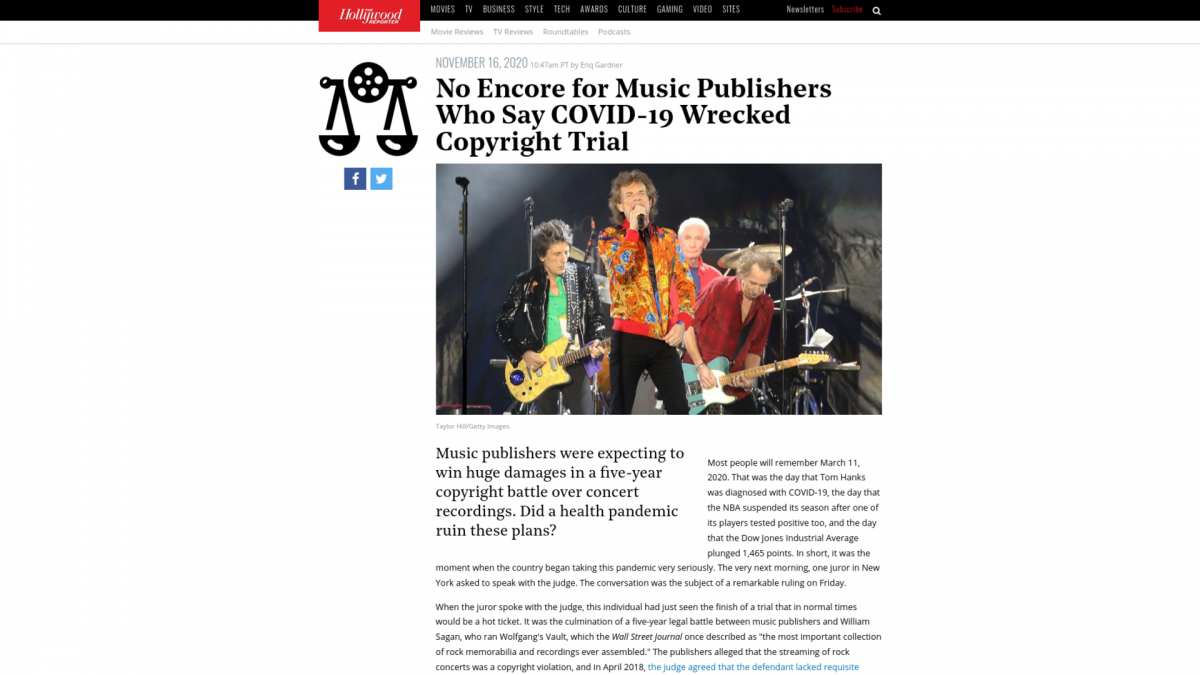 Music publishers were expecting to win huge damages in a five-year copyright battle over concert recordings. Did a health pandemic ruin these plans?
Read More: https://www.hollywoodreporter.com/thr-esq/no-encore-for-music-publishers-who-say-covid-19-wrecked-copyright-trial 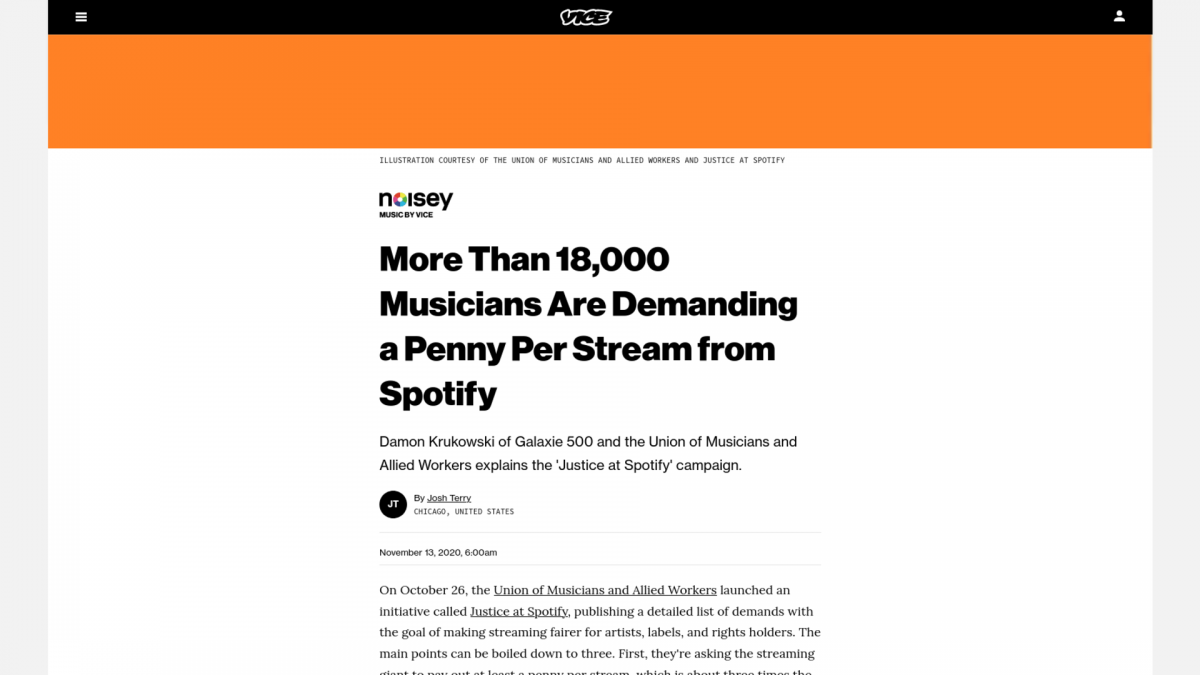 On October 26, the Union of Musicians and Allied Workers launched an initiative called Justice at Spotify, publishing a detailed list of demands with the goal of making streaming fairer for artists, labels, and rights holders. The main points can be boiled down to three. First, they’re asking the streaming giant to pay out at least a penny per stream, which is about three times the $.0038 payout artists receive on average for their music. Second, they are demanding greater financial transparency from the company, including around its contracts with major labels, distributors, and management companies. Lastly, they want Spotify to put an end to its legal battles over royalty rates, which the union describes as being “intended to further impoverish artists.” Justice at Spotify follows 2020 initiatives in the U.K. like the #KeepMusicAlive and the #BrokenRecord campaign, which looks at inequities in record label and licensing deals on top of streaming.

Thom Tillis, the US senator who co-led a series of discussions in Congress earlier this year on America’s Digital Millennium Copyright Act, has said he believes it’s time to reform American copyright law to make it more suitable for the digital age we are now in. To that end, he is seeking input from interested parties on various issues, and especially the copyright safe harbour contained in the DMCA. 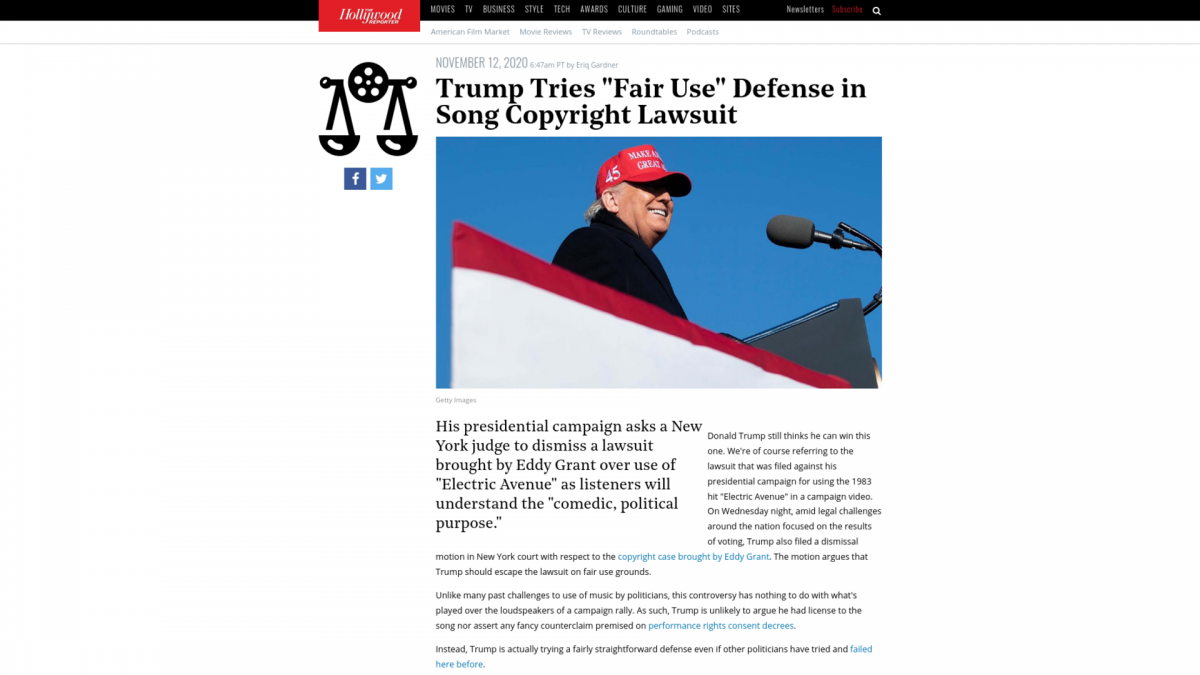 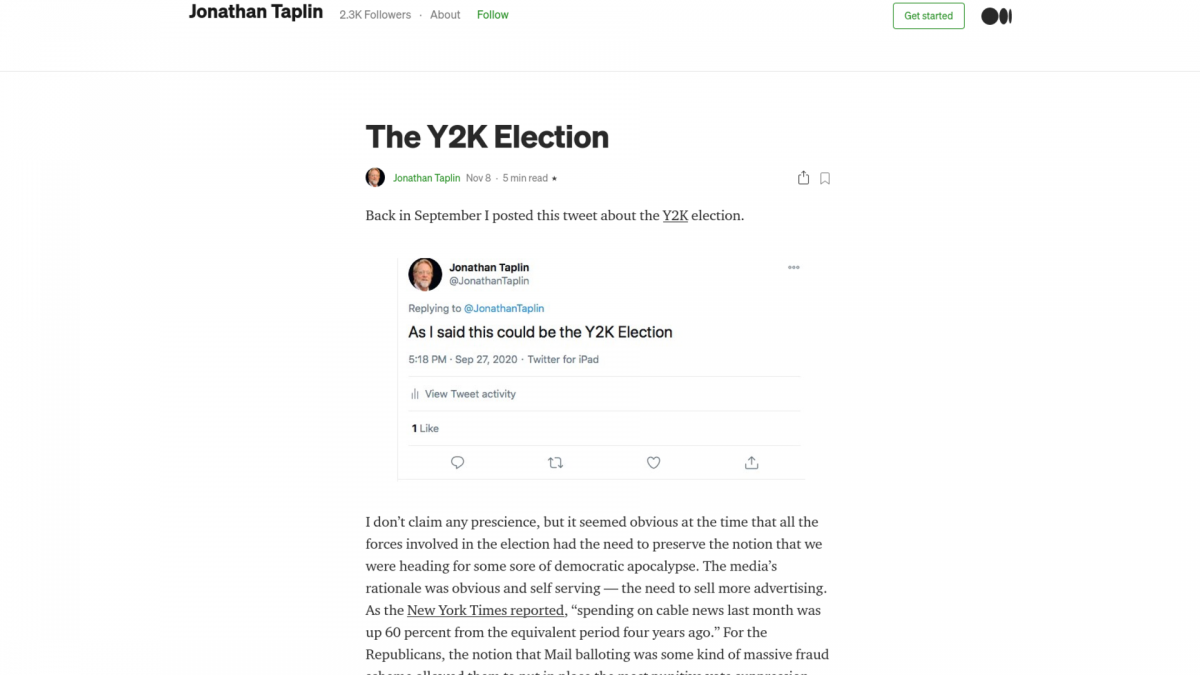 I don’t claim any prescience, but it seemed obvious at the time that all the forces involved in the election had the need to preserve the notion that we were heading for some sore of democratic apocalypse. The media’s rationale was obvious and self serving — the need to sell more advertising. As the New York Times reported, “spending on cable news last month was up 60 percent from the equivalent period four years ago.” 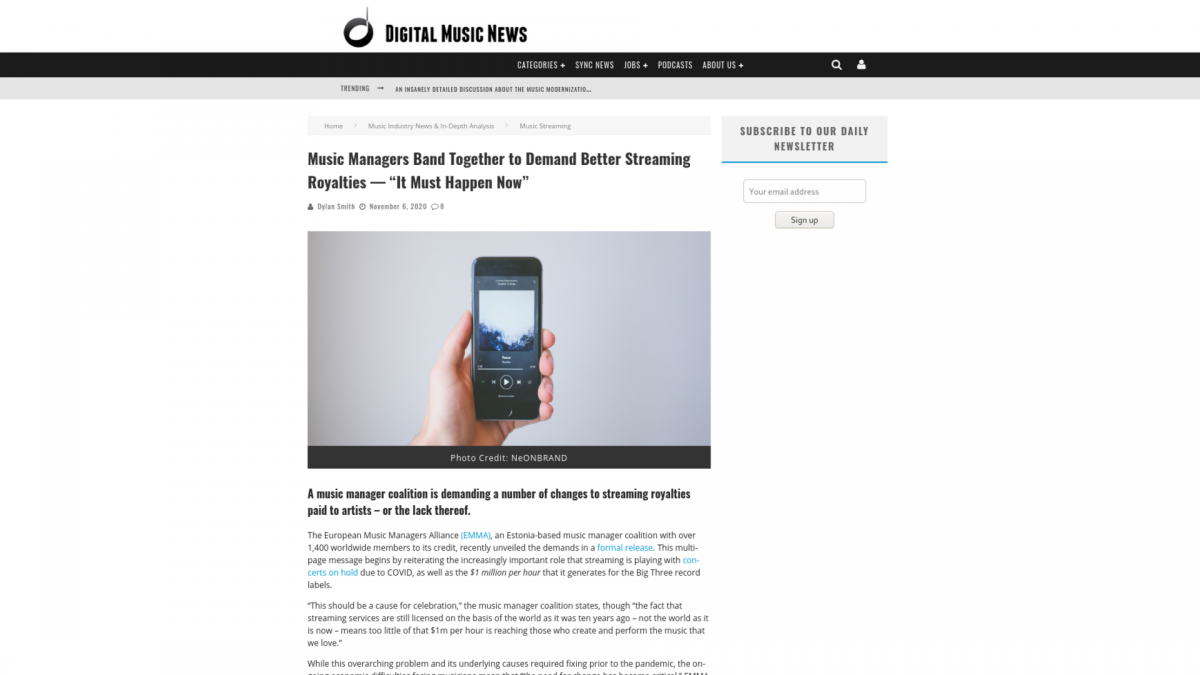 A music manager coalition is demanding a number of changes to streaming royalties paid to artists – or the lack thereof.

The European Music Managers Alliance (EMMA), an Estonia-based music manager coalition with over 1,400 worldwide members to its credit, recently unveiled the demands in a formal release. This multipage message begins by reiterating the increasingly important role that streaming is playing with concerts on hold due to COVID, as well as the $1 million per hour that it generates for the Big Three record labels. 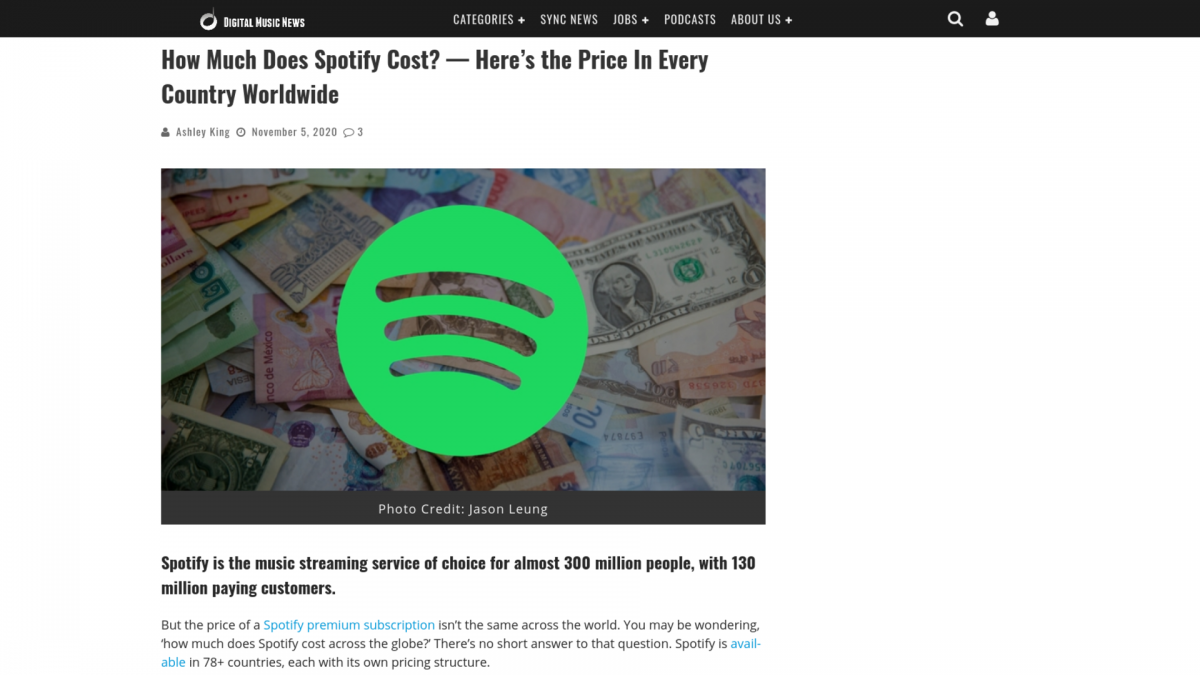 Spotify is the music streaming service of choice for almost 300 million people, with 130 million paying customers.

But the price of a Spotify premium subscription isn’t the same across the world. You may be wondering, ‘how much does Spotify cost across the globe?’ There’s no short answer to that question. Spotify is available in 78+ countries, each with its own pricing structure.

As the UK Parliament’s culture select committee prepares for its inquiry into the economics of streaming and how monies generated by the streaming services are shared out across the music industry, the European Music Managers Alliance has called for a pan-European debate on some of the key issues, including legacy record contracts, black box distributions and user-centric royalty distribution.

The copyright battle over Led Zeppelin’s megahit “Stairway to Heaven” hasn’t given up the ghost yet.

Lawyers for the plaintiff have asked the U.S. Supreme Court to reconsider the matter after the nation’s highest court said Oct. 5 it had “denied” a petition to hear a last-ditch appeal.

The Supreme Court in New Zealand has ruled that MegaUpload founder Kim Dotcom can be extradited to the US to face criminal copyright infringement charges in relation to his long-defunct file-transfer platform. However, in something of a mixed bag ruling, the top court also provided Dotcom and his former colleagues with an extra route of appeal before any extradition actually takes place. 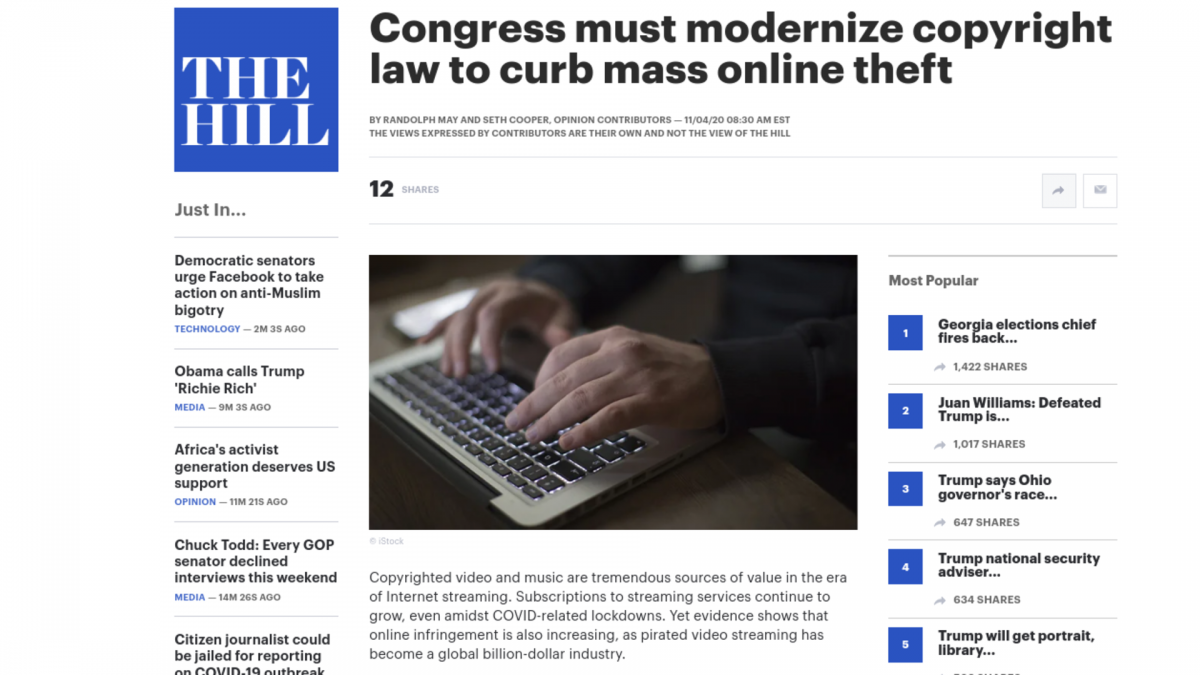 Copyrighted video and music are tremendous sources of value in the era of Internet streaming. Subscriptions to streaming services continue to grow, even amidst COVID-related lockdowns. Yet evidence shows that online infringement is also increasing, as pirated video streaming has become a global billion-dollar industry. 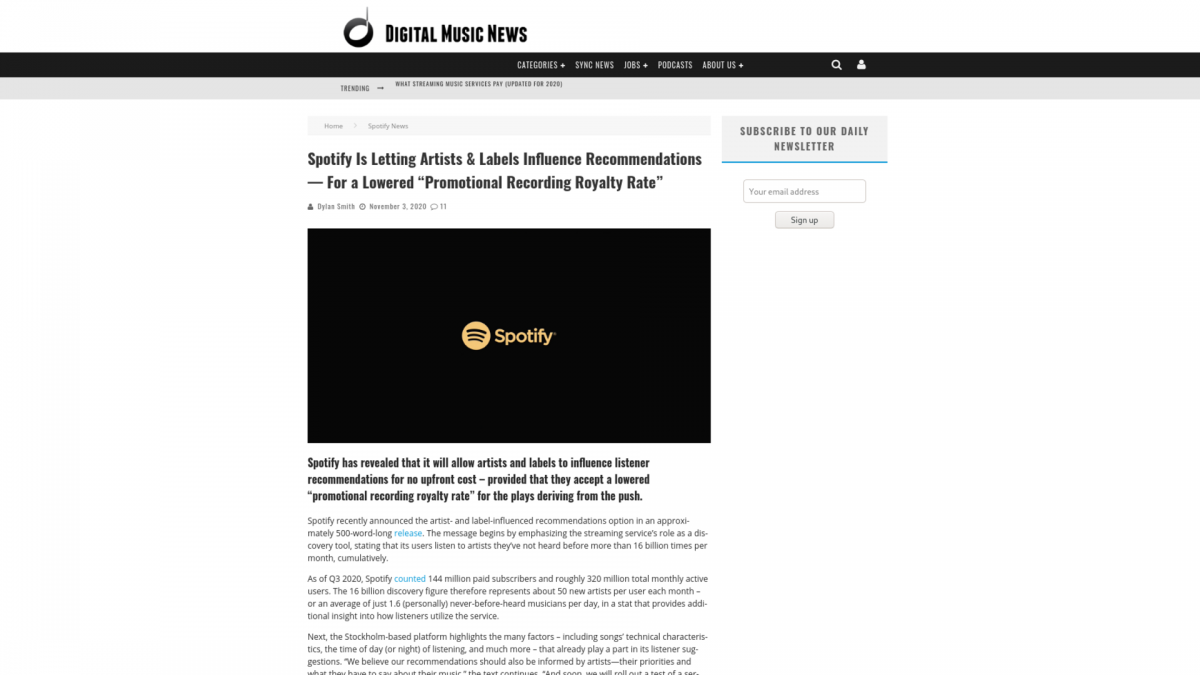 Spotify has revealed that it will allow artists and labels to influence listener recommendations for no upfront cost – provided that they accept a lowered “promotional recording royalty rate” for the plays deriving from the push.

Spotify recently announced the artist- and label-influenced recommendations option in an approximately 500-word-long release. The message begins by emphasizing the streaming service’s role as a discovery tool, stating that its users listen to artists they’ve not heard before more than 16 billion times per month, cumulatively. 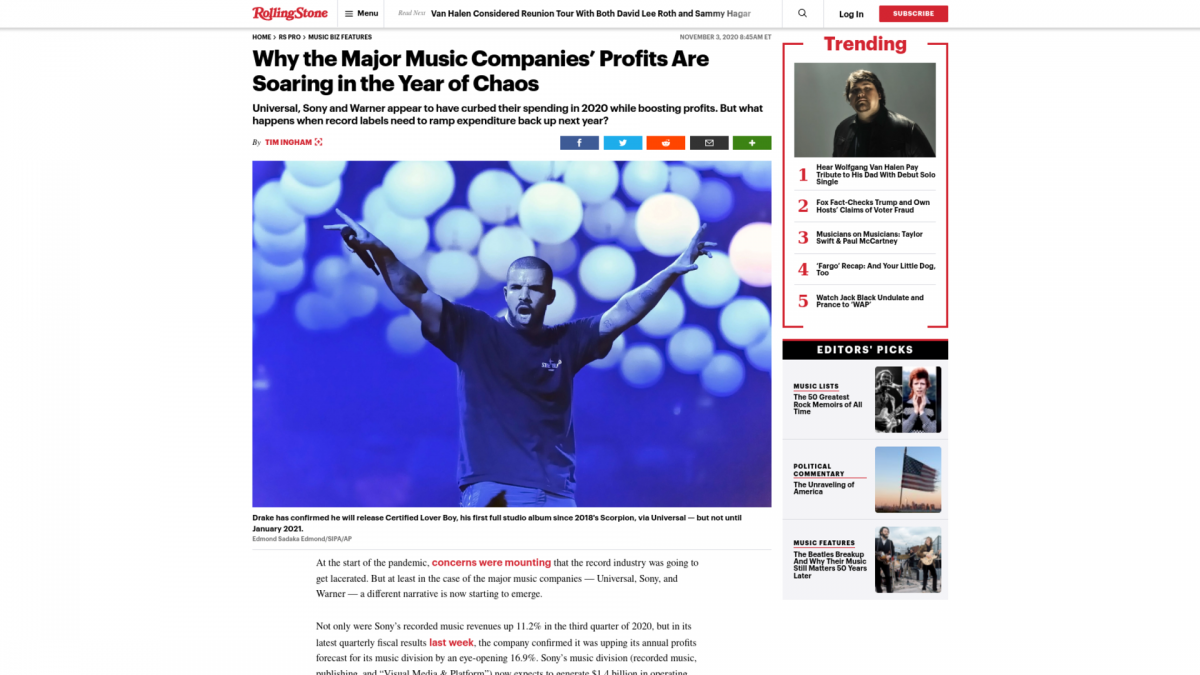 At the start of the pandemic, concerns were mounting that the record industry was going to get lacerated. But at least in the case of the major music companies — Universal, Sony, and Warner — a different narrative is now starting to emerge. 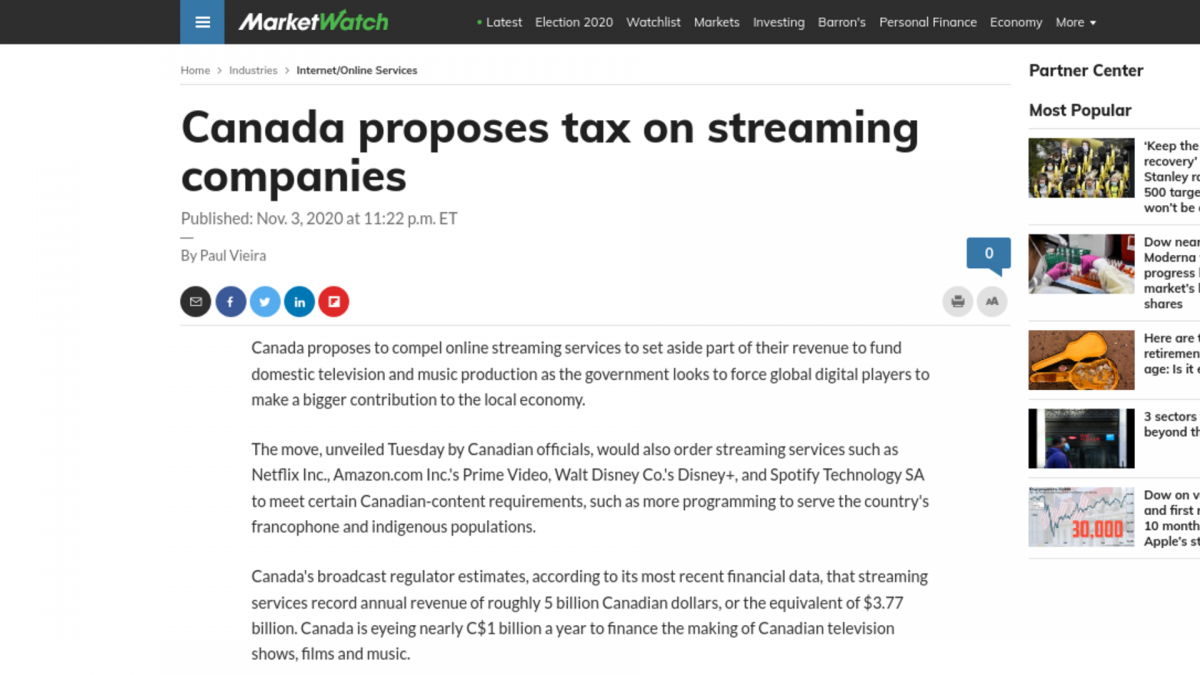 Canada proposes to compel online streaming services to set aside part of their revenue to fund domestic television and music production as the government looks to force global digital players to make a bigger contribution to the local economy.