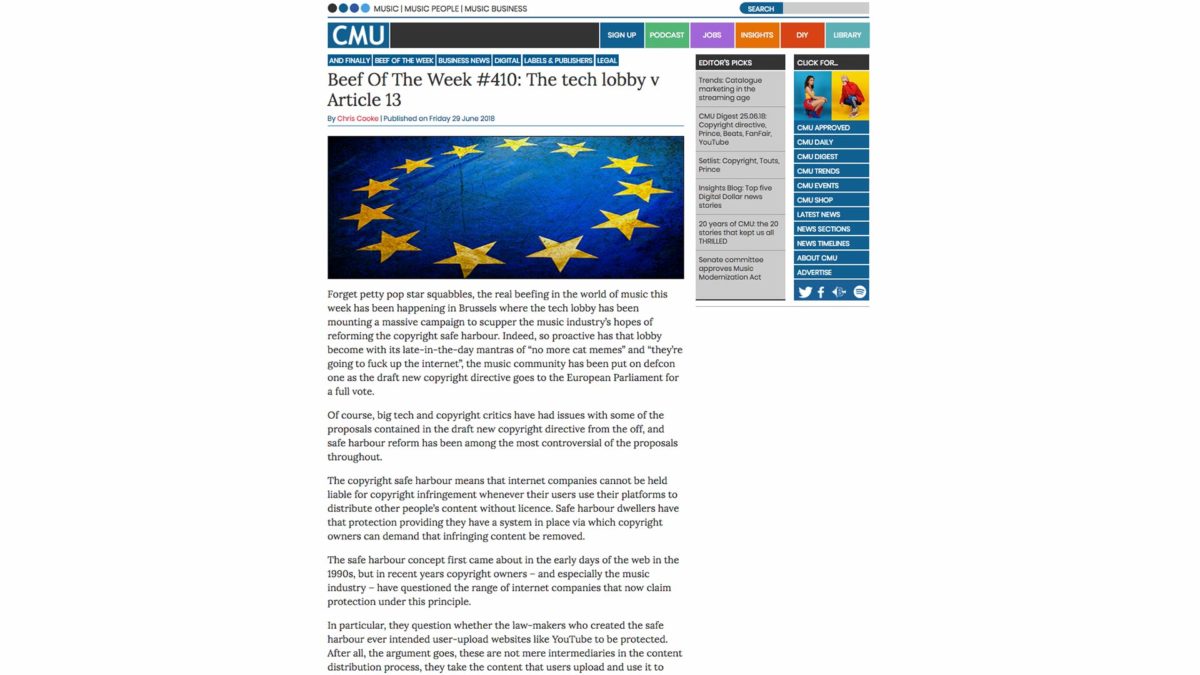 Forget petty pop star squabbles, the real beefing in the world of music this week has been happening in Brussels where the tech lobby has been mounting a massive campaign to scupper the music industry’s hopes of reforming the copyright safe harbour. Indeed, so proactive has that lobby become with its late-in-the-day mantras of “no more cat memes” and “they’re going to fuck up the internet”, the music community has been put on defcon one as the draft new copyright directive goes to the European Parliament for a full vote. 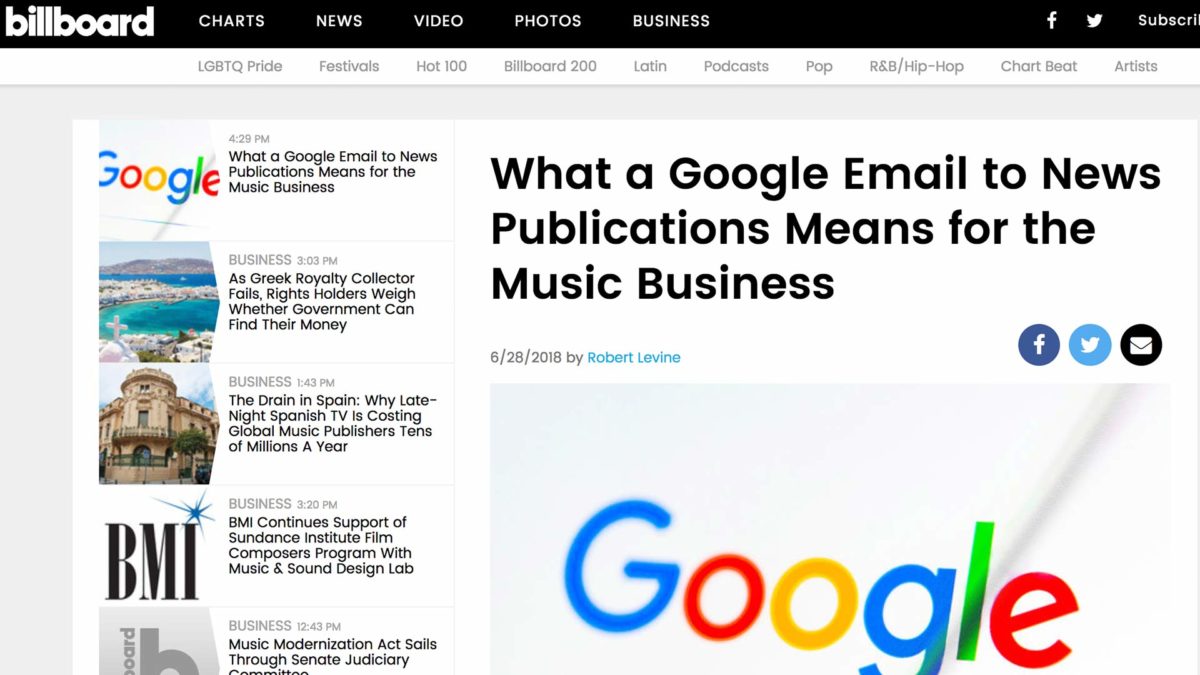 The tech giant is asking a group of partners who have come to depend on its largesse to take action that will make them even more dependent. 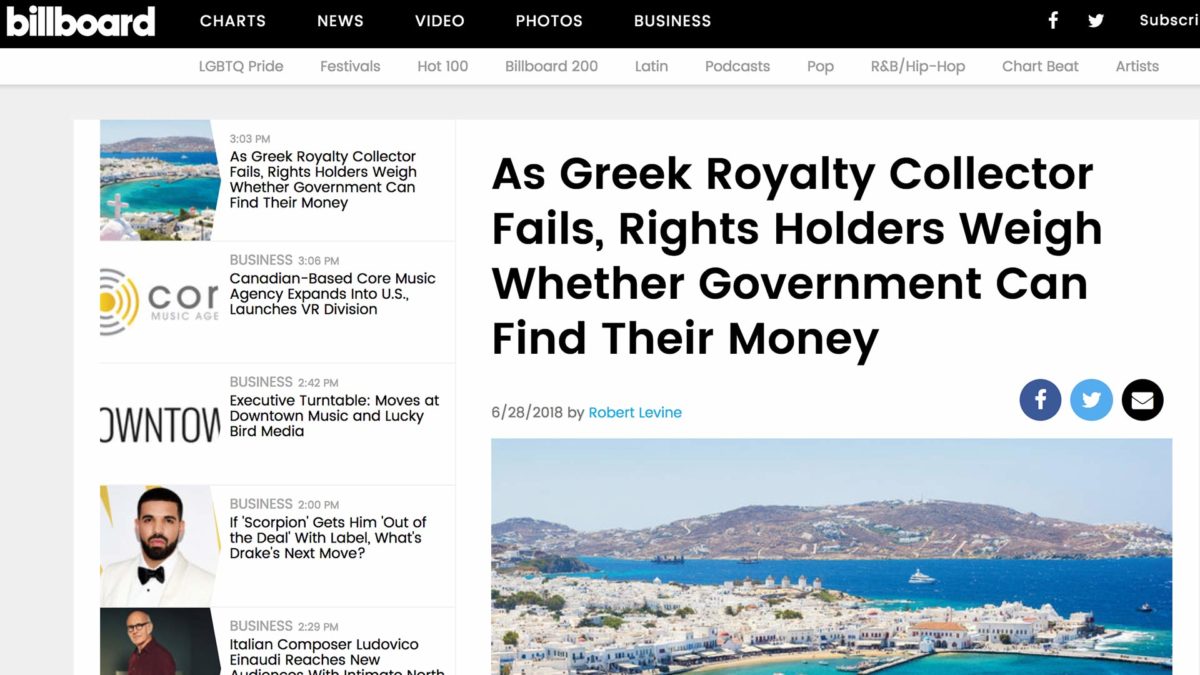 The crisis at SGAE, the Spanish performance rights organization, involves a telenovela’s worth of plot twists — including royalties for inaudible music and the court-ordered dismissal of a WIPO arbitration. But the situation at its Greek counterpart AEPI (the Hellenic Society for the Protection of Intellectual Property) is downright epic. 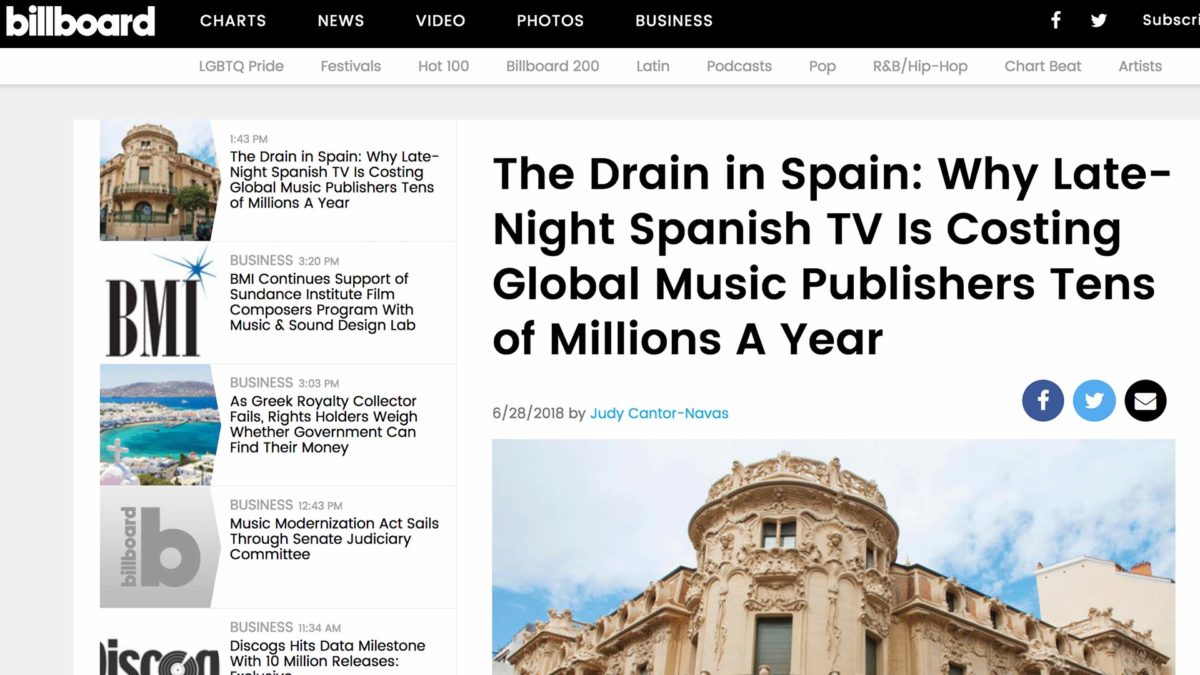 On June 21, members of Spain’s royalty collection group, the General Society of Authors and Editors (SGAE), assembled in Madrid and voted against proposals that the music industry had feared could propel a long-running scheme that has involved astrologers, inaudible music and songs with copyrights registered to Spaniards’ pets. 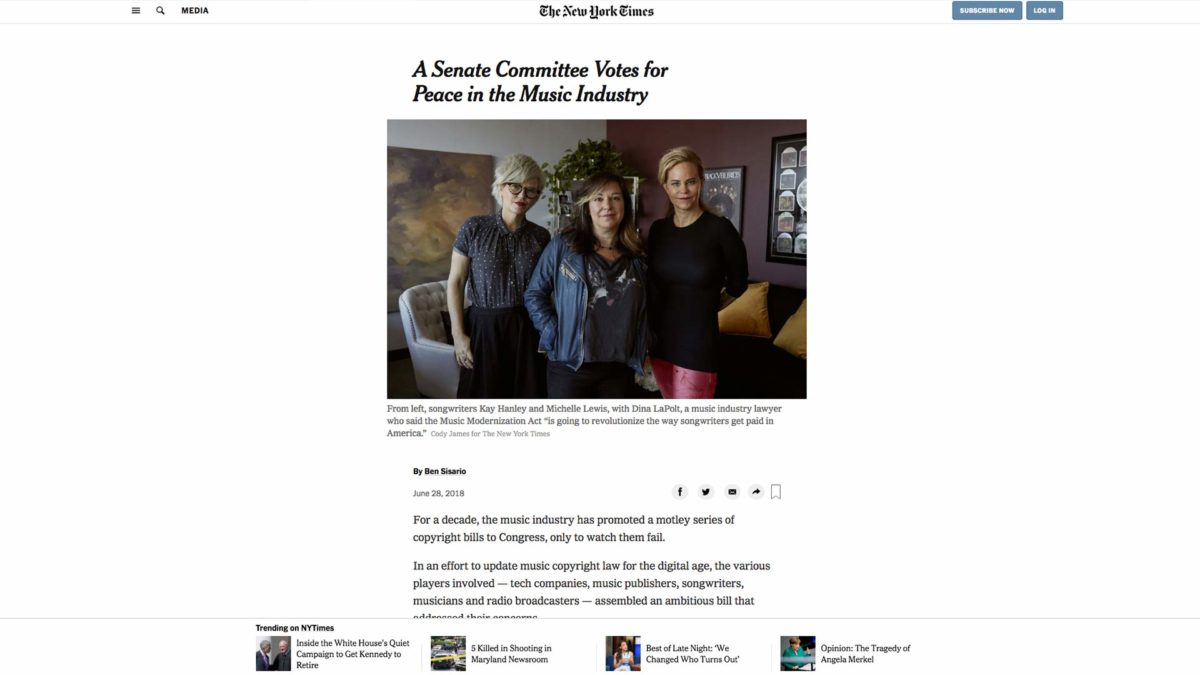 For a decade, the music industry has promoted a motley series of copyright bills to Congress, only to watch them fail.

In an effort to update music copyright law for the digital age, the various players involved — tech companies, music publishers, songwriters, musicians and radio broadcasters — assembled an ambitious bill that addressed their concerns. 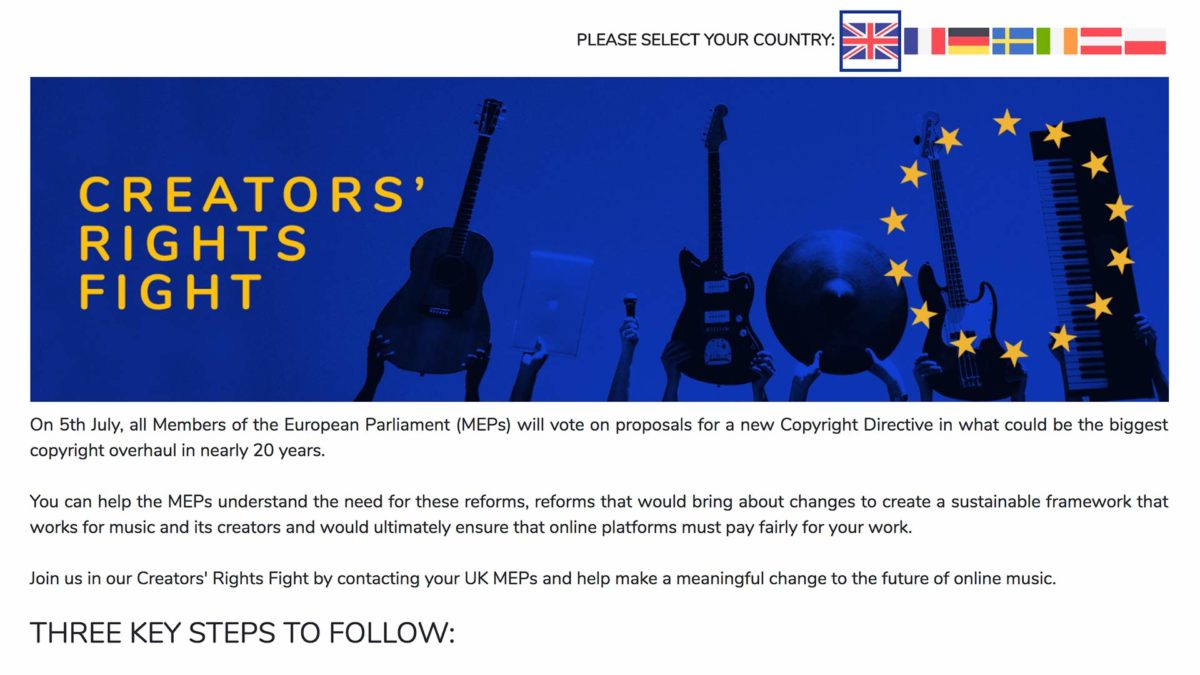 On 5th July, all Members of the European Parliament (MEPs) will vote on proposals for a new Copyright Directive in what could be the biggest copyright overhaul in nearly 20 years. 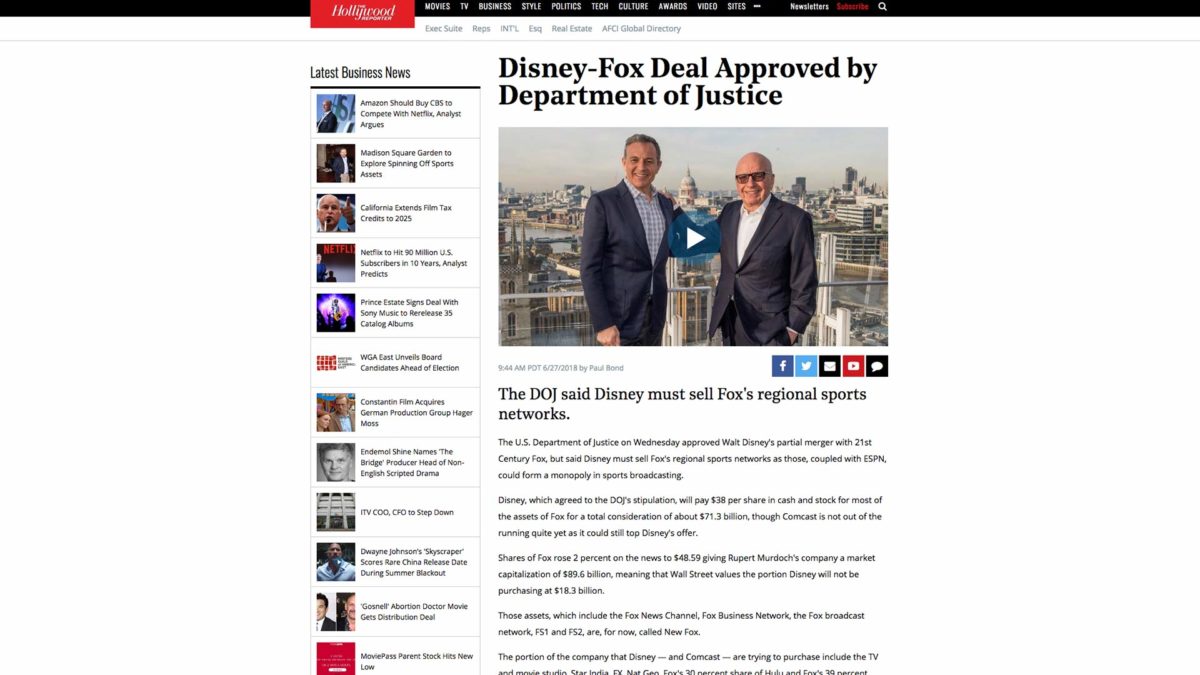 The U.S. Department of Justice on Wednesday approved Walt Disney’s partial merger with 21st Century Fox, but said Disney must sell Fox’s regional sports networks as those, coupled with ESPN, could form a monopoly in sports broadcasting. 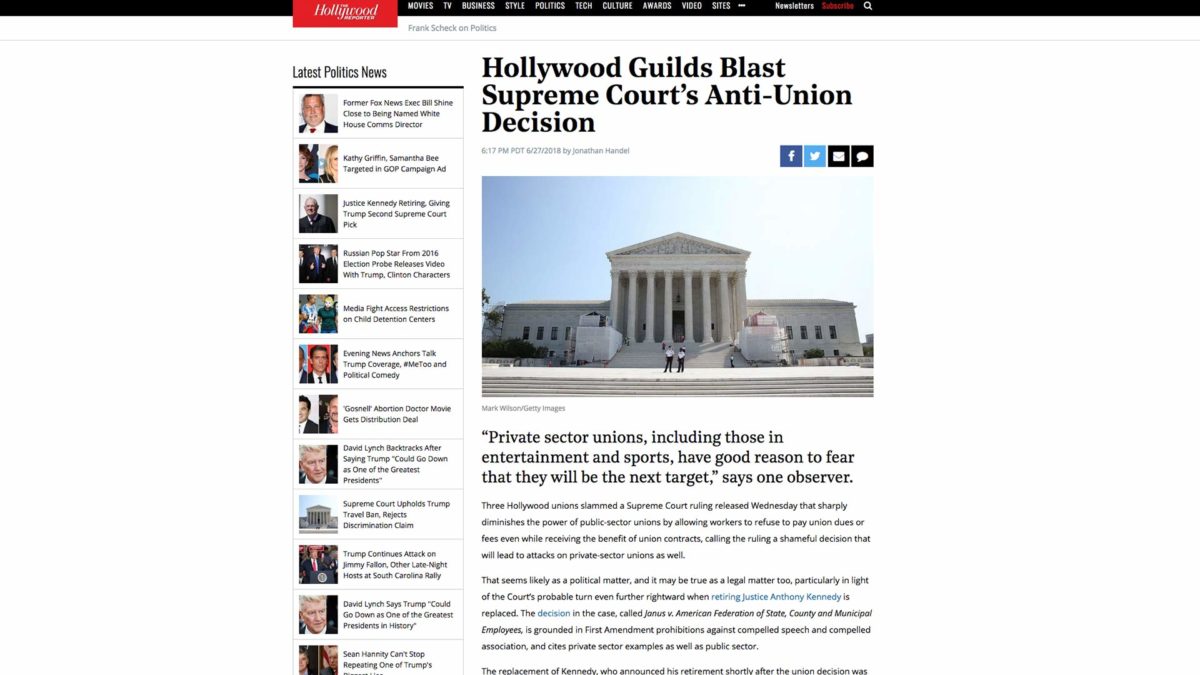 Three Hollywood unions slammed a Supreme Court ruling released Wednesday that sharply diminishes the power of public-sector unions by allowing workers to refuse to pay union dues or fees even while receiving the benefit of union contracts, calling the ruling a shameful decision that will lead to attacks on private-sector unions as well. 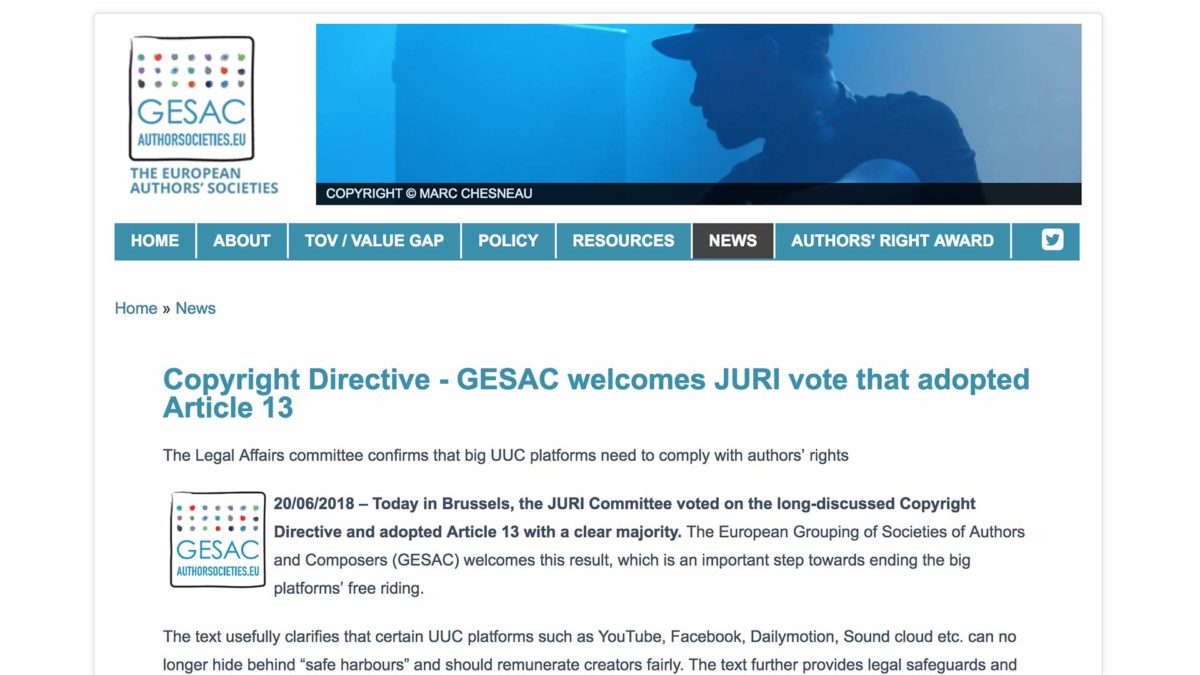 20/06/2018 – Today in Brussels, the JURI Committee voted on the long-discussed Copyright Directive and adopted Article 13 with a clear majority. The European Grouping of Societies of Authors and Composers (GESAC) welcomes this result, which is an important step towards ending the big platforms’ free riding. 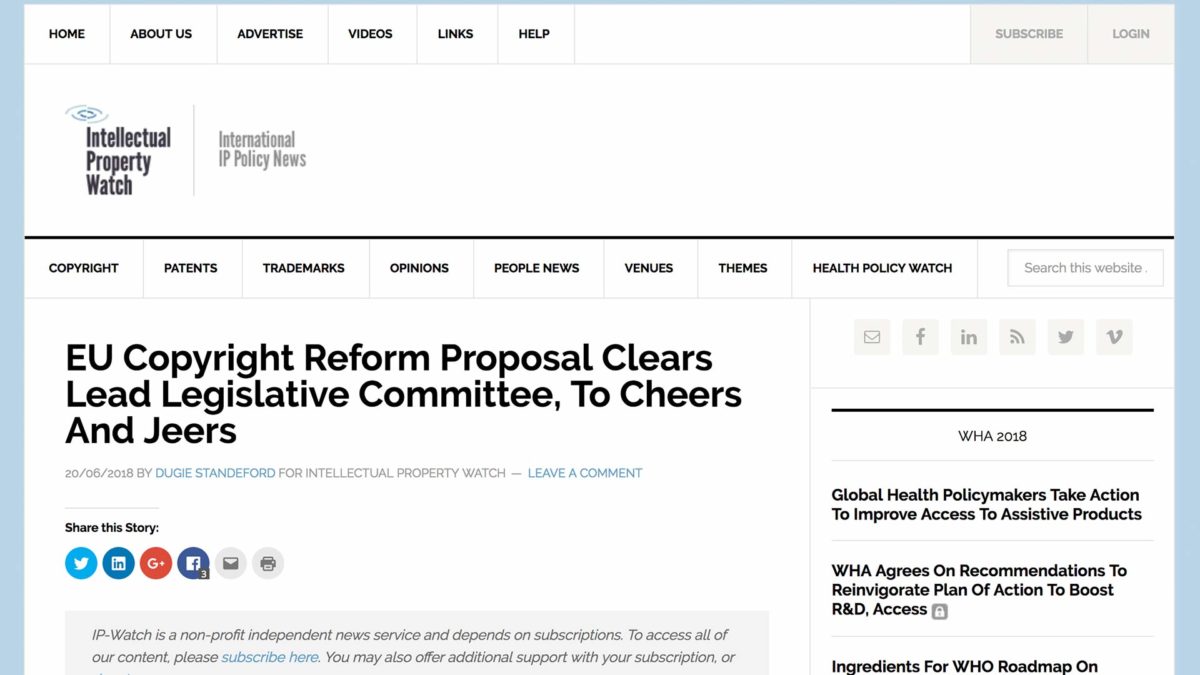 The European Parliament Legal Affairs Committee (JURI) adopted its report on the European Commission-proposed copyright in the digital single market directive yesterday. The vote, by the lead committee vetting the proposal, sparked a continuation of the acrimonious debate that has raged for many months over several controversial provisions: The creation of a new right for online publishers and a requirement that Internet platforms monitor users’ uploads for copyright infringements. The narrow majority that approved the report by German Member of the European Parliament (MEP) Axel Voss, of the European People’s Party, “suggests that the struggle is still long,” telecom consultant Innocenzo Genna blogged. 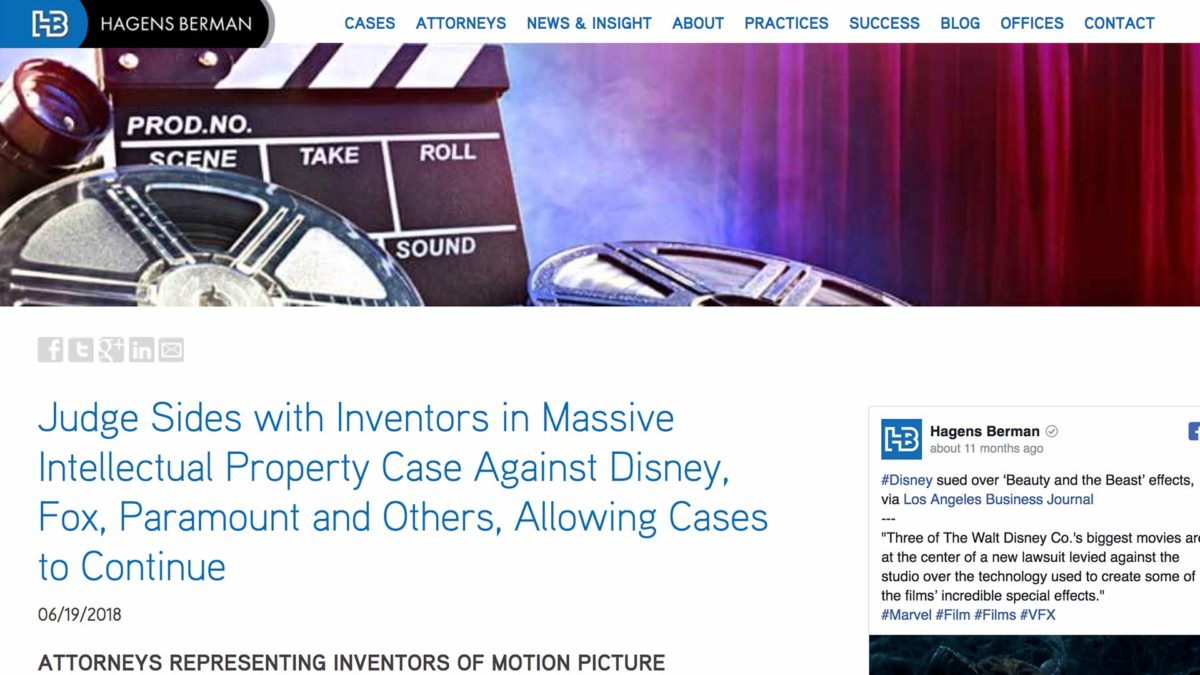 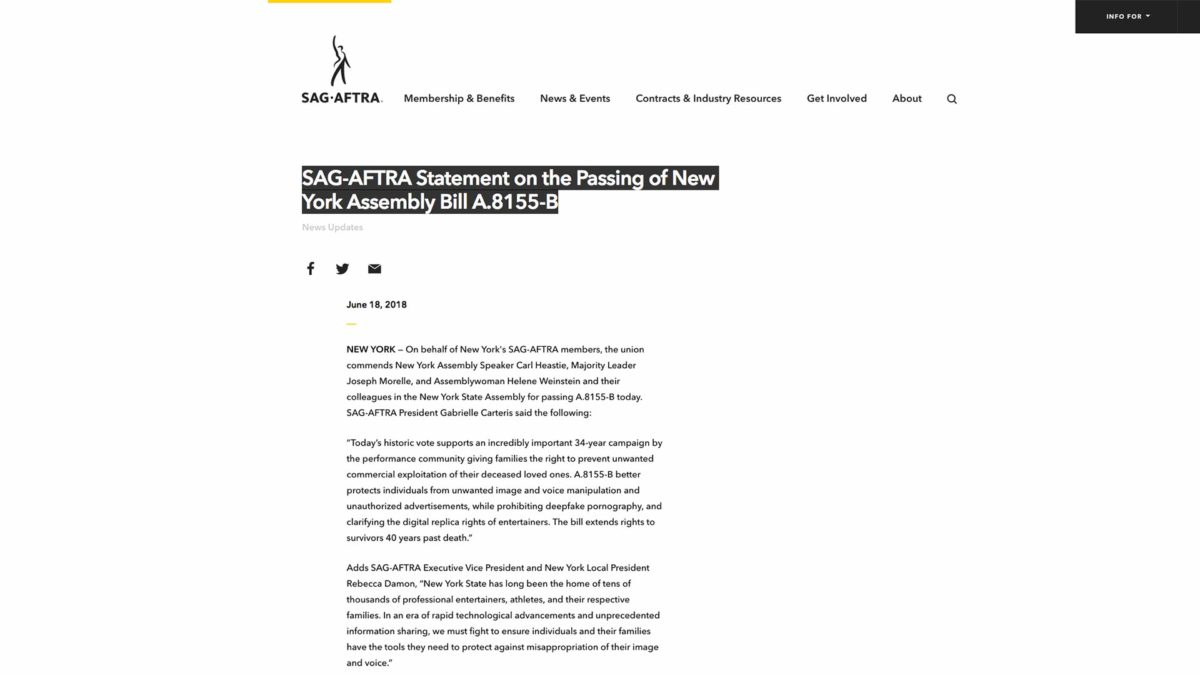 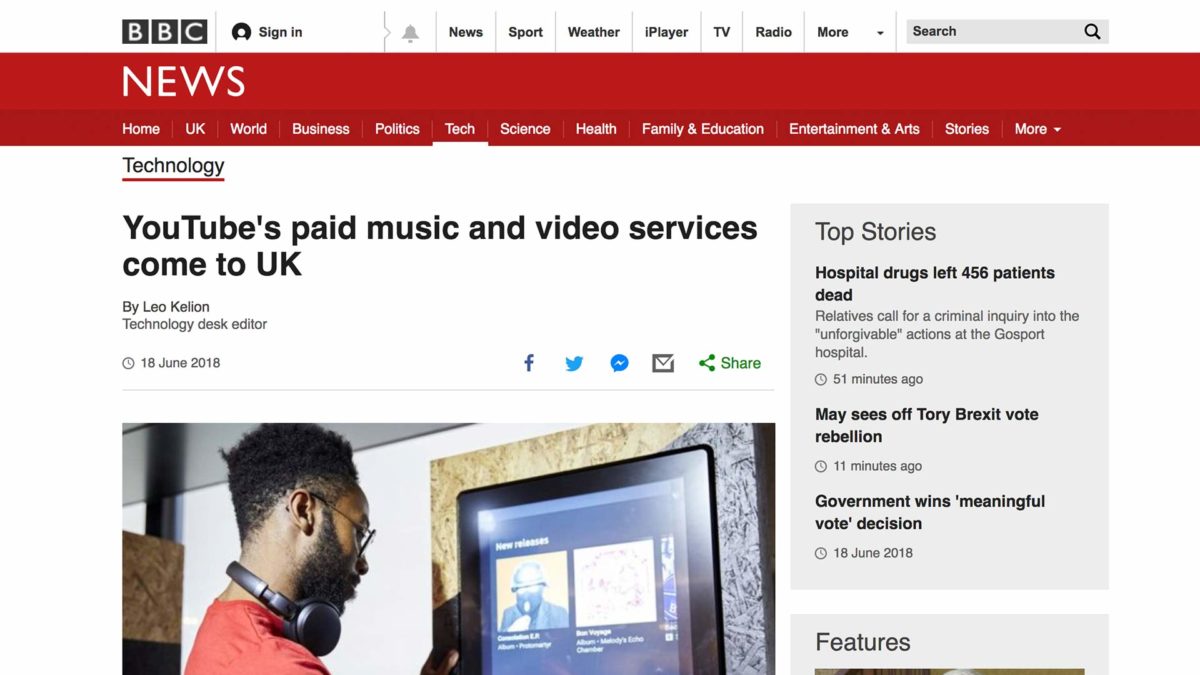 YouTube is expanding its subscription-based music and video services to the UK and a further 11 countries. 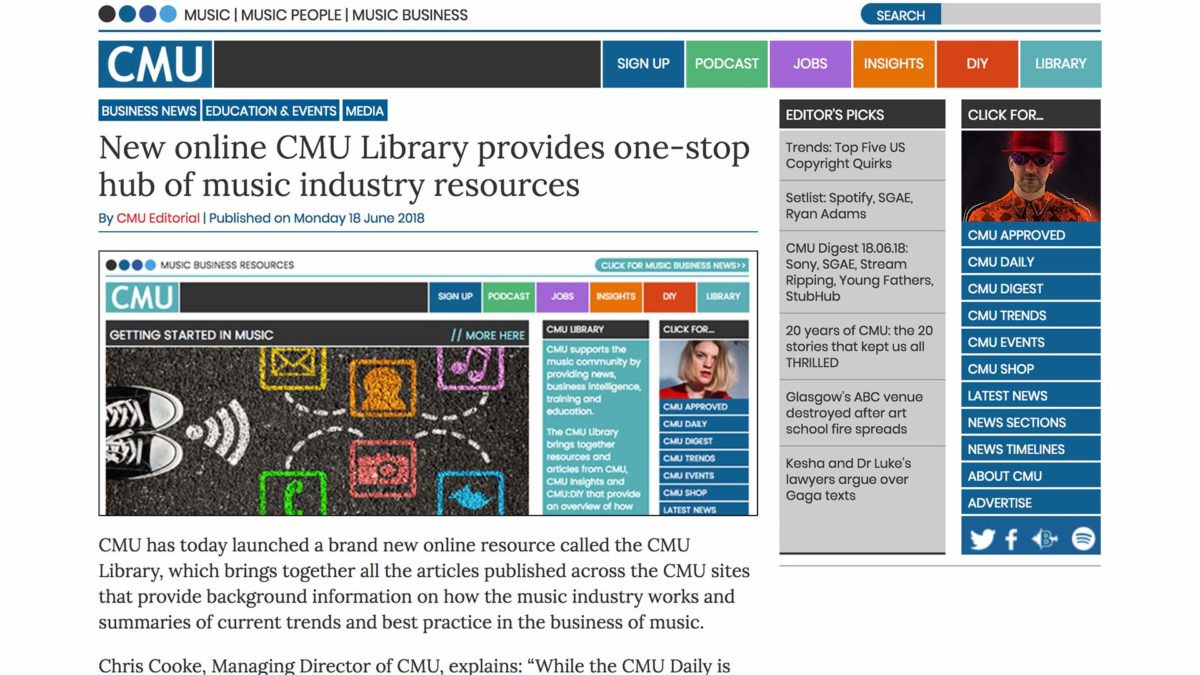 CMU has today launched a brand new online resource called the CMU Library, which brings together all the articles published across the CMU sites that provide background information on how the music industry works and summaries of current trends and best practice in the business of music. 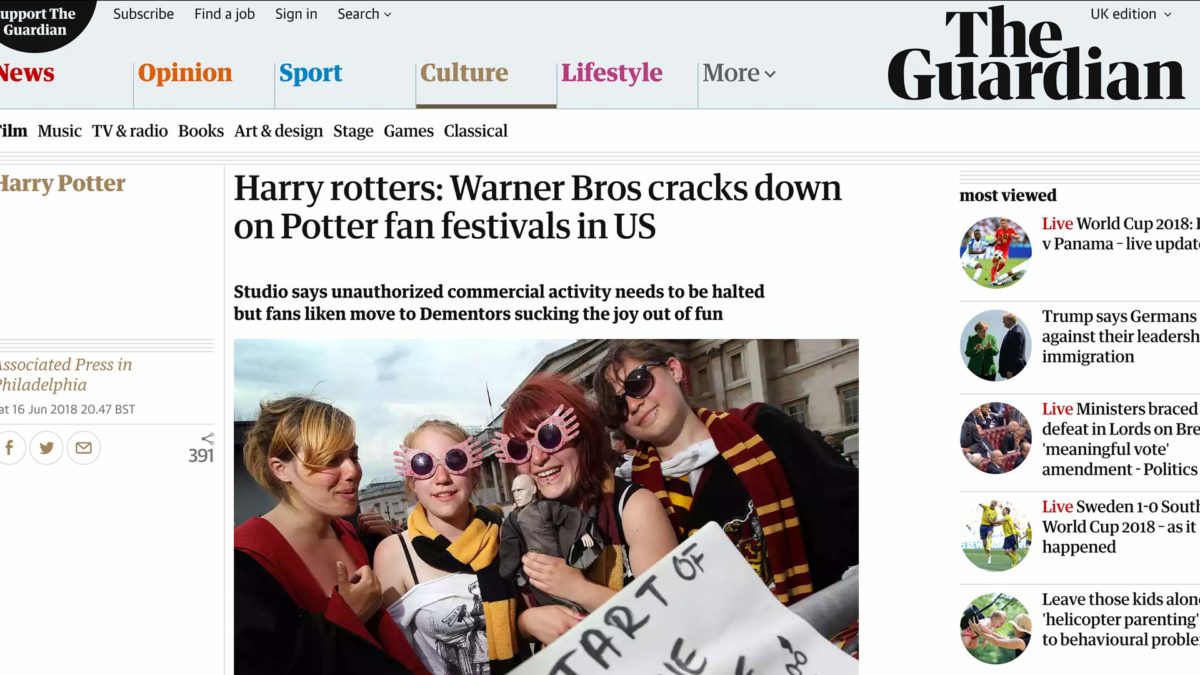 Warner Bros is cracking down on local Harry Potter fan festivals around the US, saying it is necessary to halt unauthorized commercial activity. Fans liken the move to Dementors sucking the joy out of homegrown fun. Festival directors say they will change the events into generic celebrations of magic. 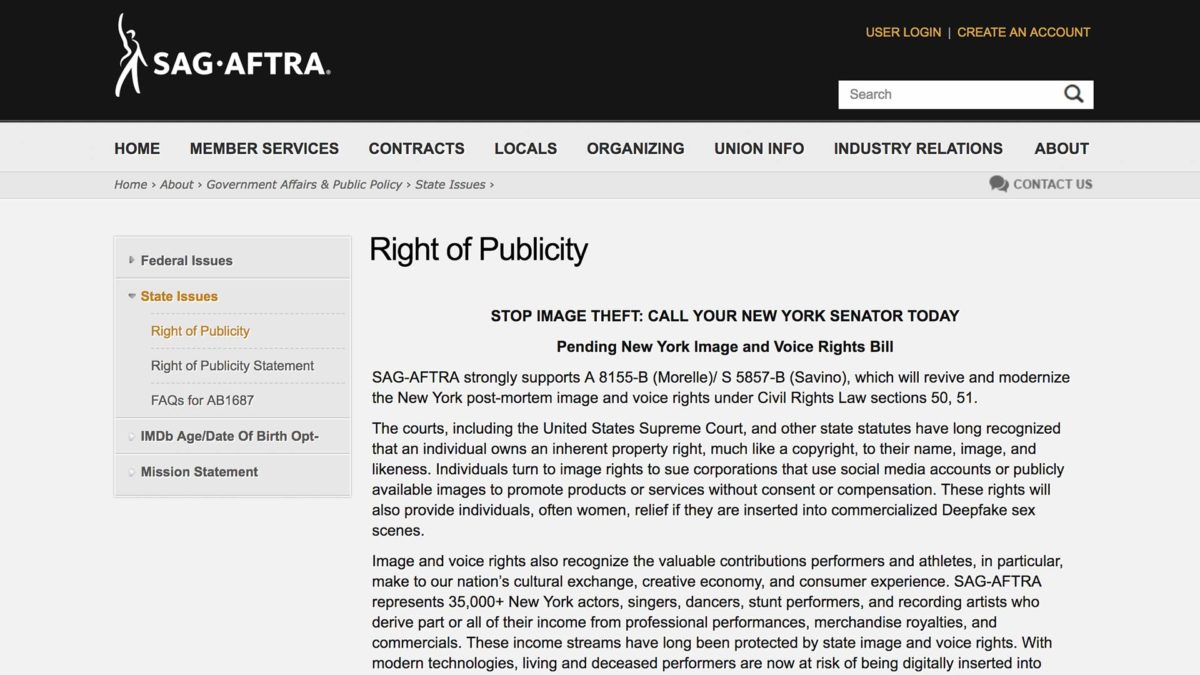 SAG-AFTRA strongly supports A 8155-B (Morelle)/ S 5857-B (Savino), which will revive and modernize the New York post-mortem image and voice rights under Civil Rights Law sections 50, 51.

Following Sony Corp.’s April sale of half of its stake in Spotify, Sony Music Entertainment (SME) sent an email to indie labels on Thursday (June 14) declaring its intent to share a portion of the profits with “eligible artists and participants as soon as possible,” with a target of August. 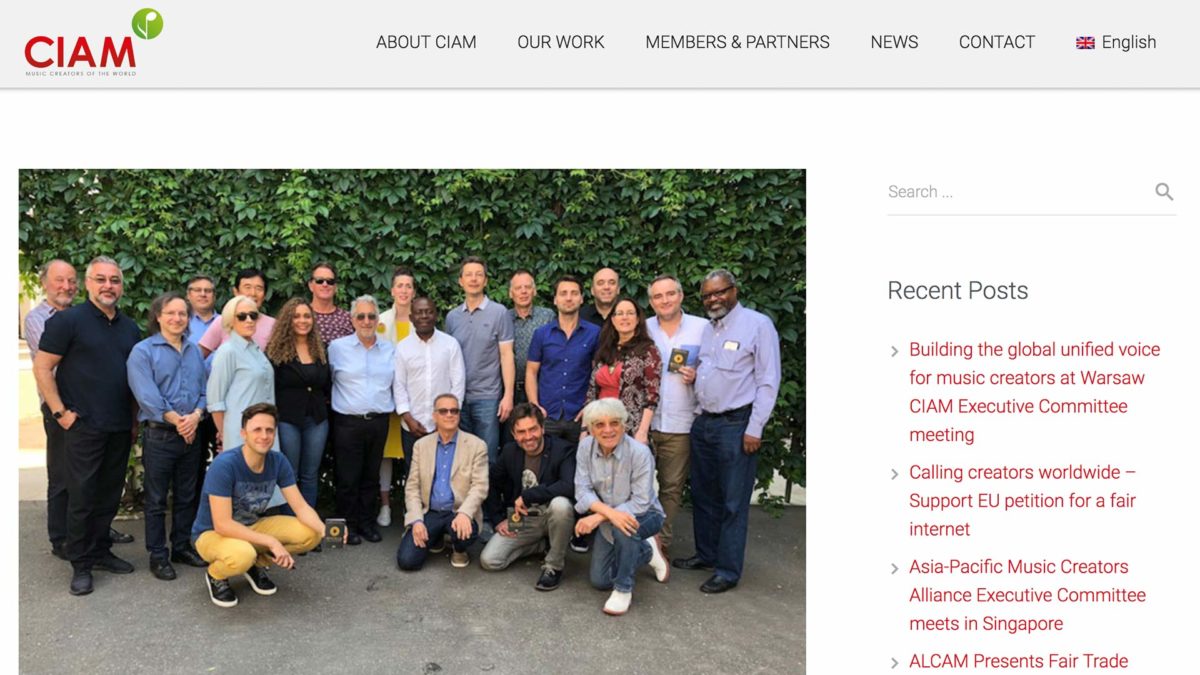 CIAM, the internationally recognised global voice of music creators, gathered composers, songwriters and artists from around the world in Warsaw for its Executive Committee meeting on June 2nd-4th. The Executive Committee (Exco) is a group of creators and representatives from societies that establish strategy and coordinate on continental, country and local levels. Organised by Polish music society ZAiKS, the meeting was the first led by North American songwriter, producer and CIAM President Eddie Schwartz. 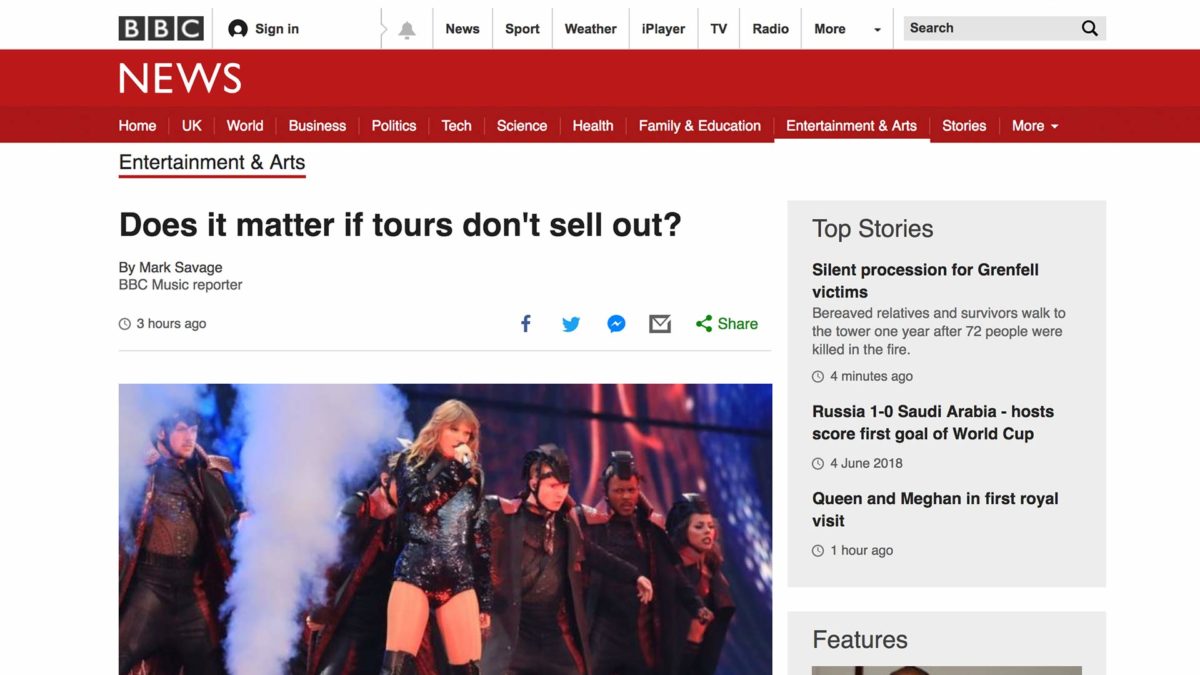 Tickets have remained available for every date of Swift’s UK tour, and fans in Dublin, where she plays this weekend, have reported that tickets are being given away for free. 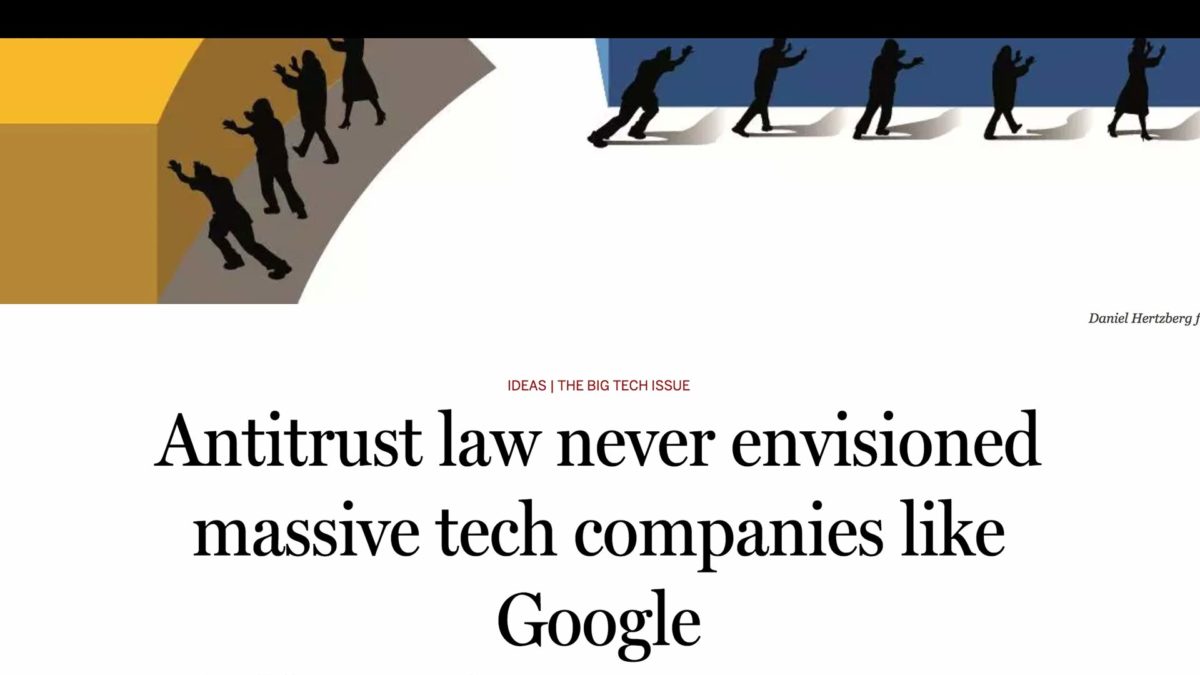 THE INTERNET HAS become so important to modern life that it’s hard to imagine it working much differently from the way it does. If you want to know something, you “Google it,” for free, presumably knowing you’ll be served targeted advertising. But today’s online world isn’t only a product of technological progress; it’s also the result of any number of legal cases and policy decisions that could easily have gone another way. 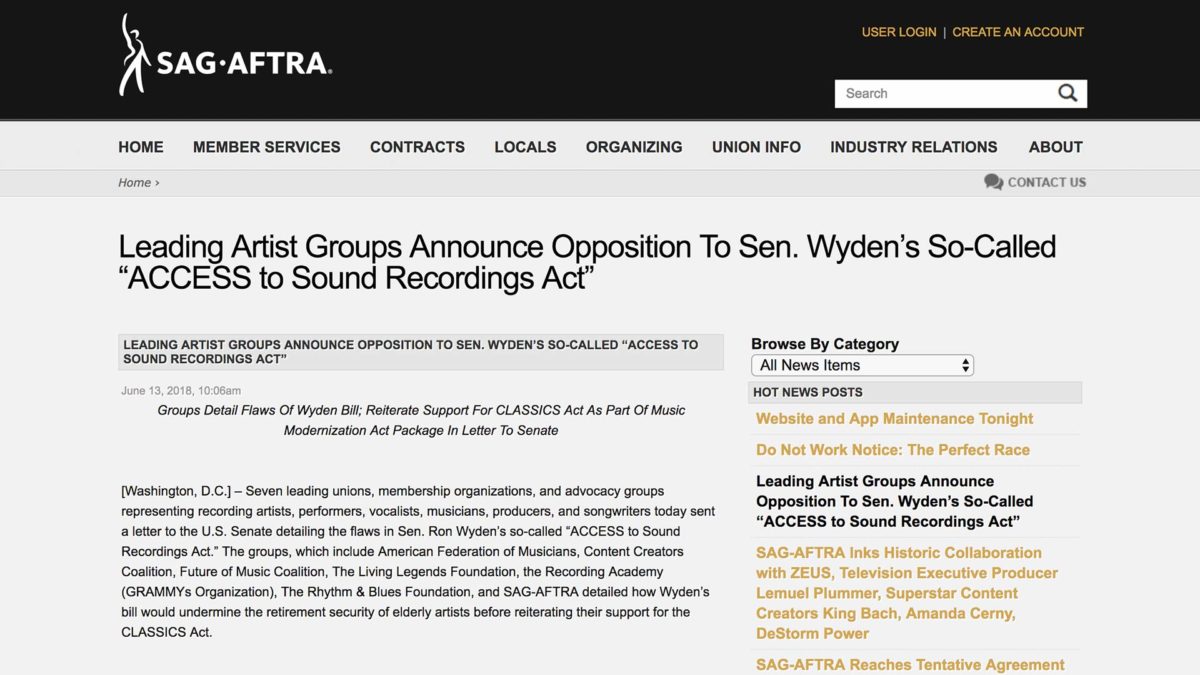 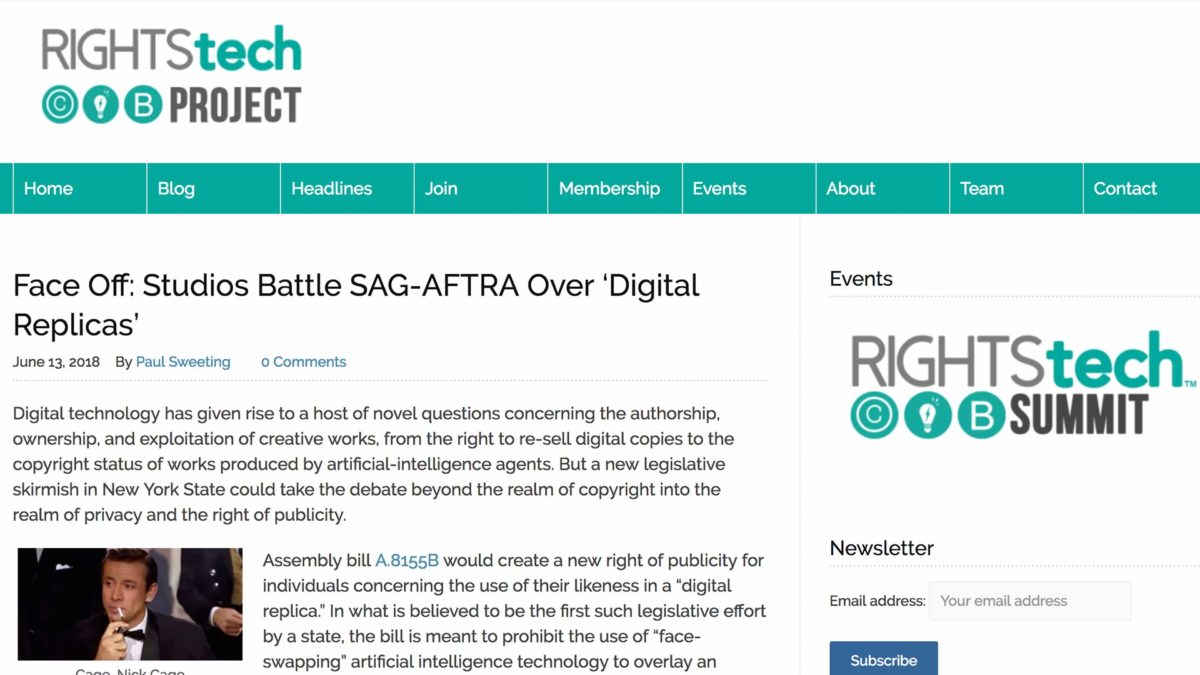 Digital technology has given rise to a host of novel questions concerning the authorship, ownership, and exploitation of creative works, from the right to re-sell digital copies to the copyright status of works produced by artificial-intelligence agents. But a new legislative skirmish in New York State could take the debate beyond the realm of copyright into the realm of privacy and the right of publicity. 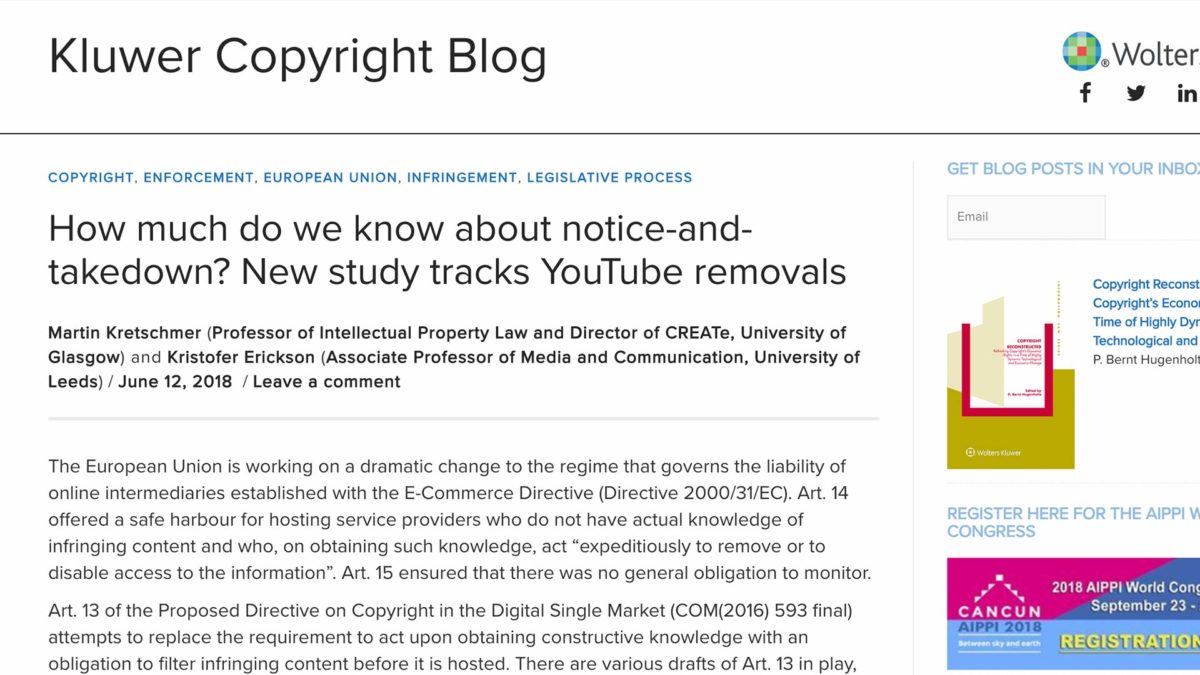 The European Union is working on a dramatic change to the regime that governs the liability of online intermediaries established with the E-Commerce Directive (Directive 2000/31/EC). Art. 14 offered a safe harbour for hosting service providers who do not have actual knowledge of infringing content and who, on obtaining such knowledge, act “expeditiously to remove or to disable access to the information”. Art. 15 ensured that there was no general obligation to monitor. 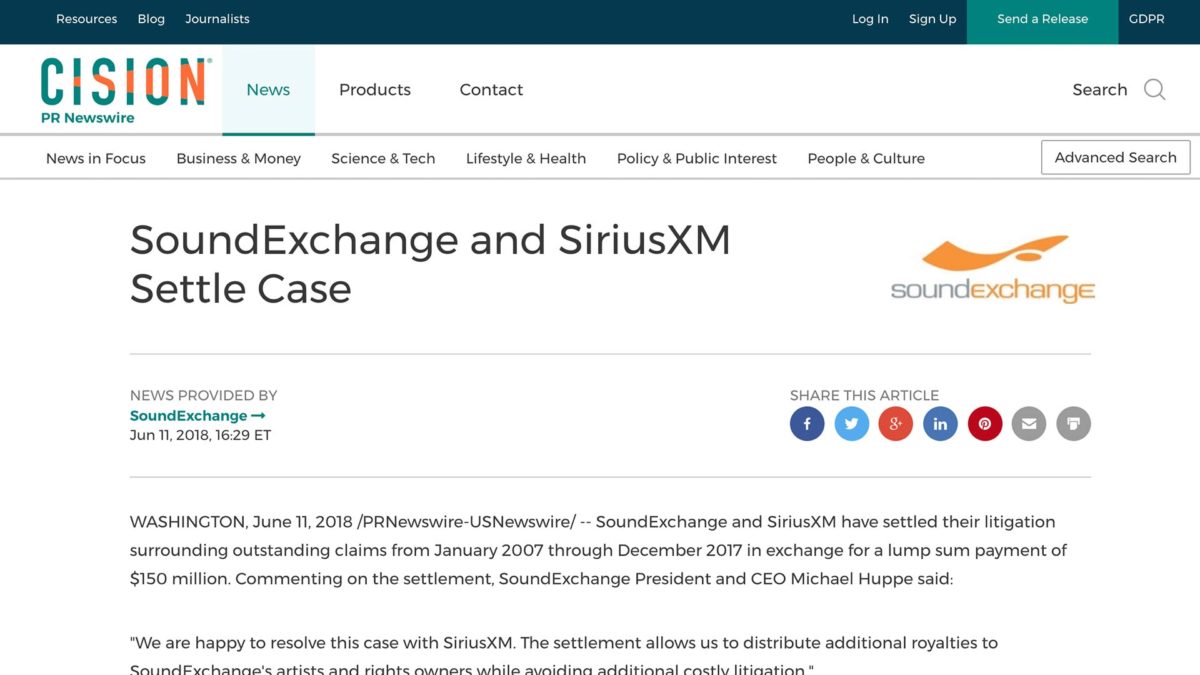 WASHINGTON, June 11, 2018 /PRNewswire-USNewswire/ — SoundExchange and SiriusXM have settled their litigation surrounding outstanding claims from January 2007 through December 2017 in exchange for a lump sum payment of $150 million. 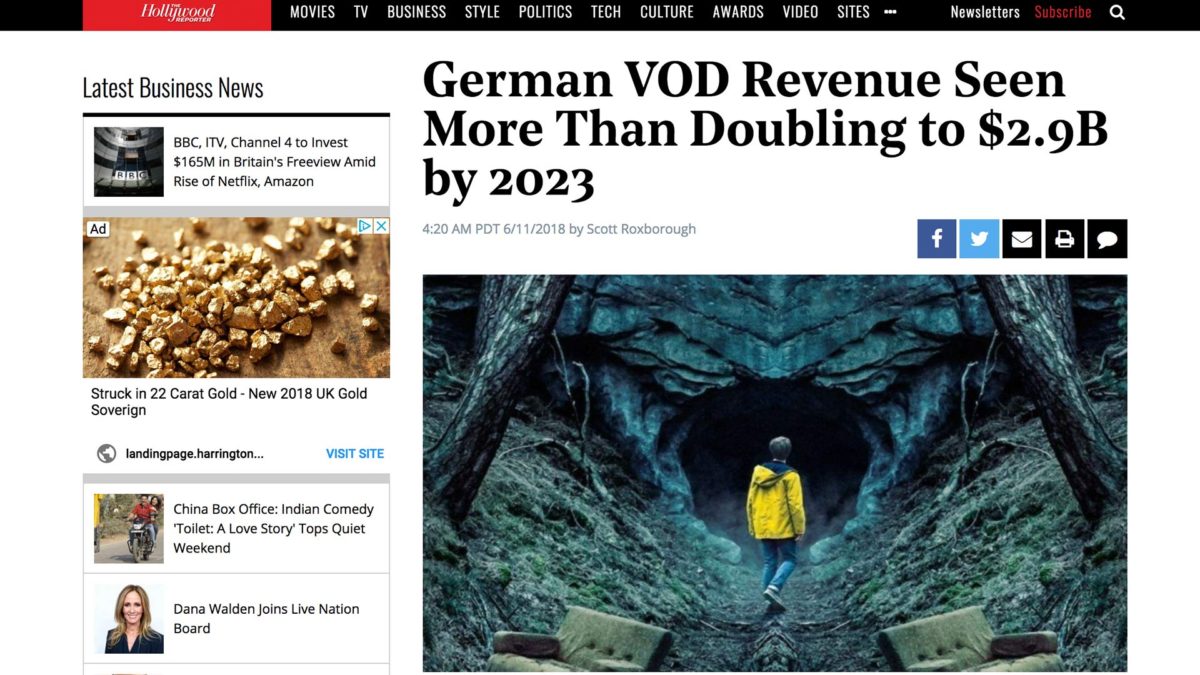 German consumers have taken their time adapting to video-on-demand, but a new study, published Monday, predicts explosive growth in the next five years. 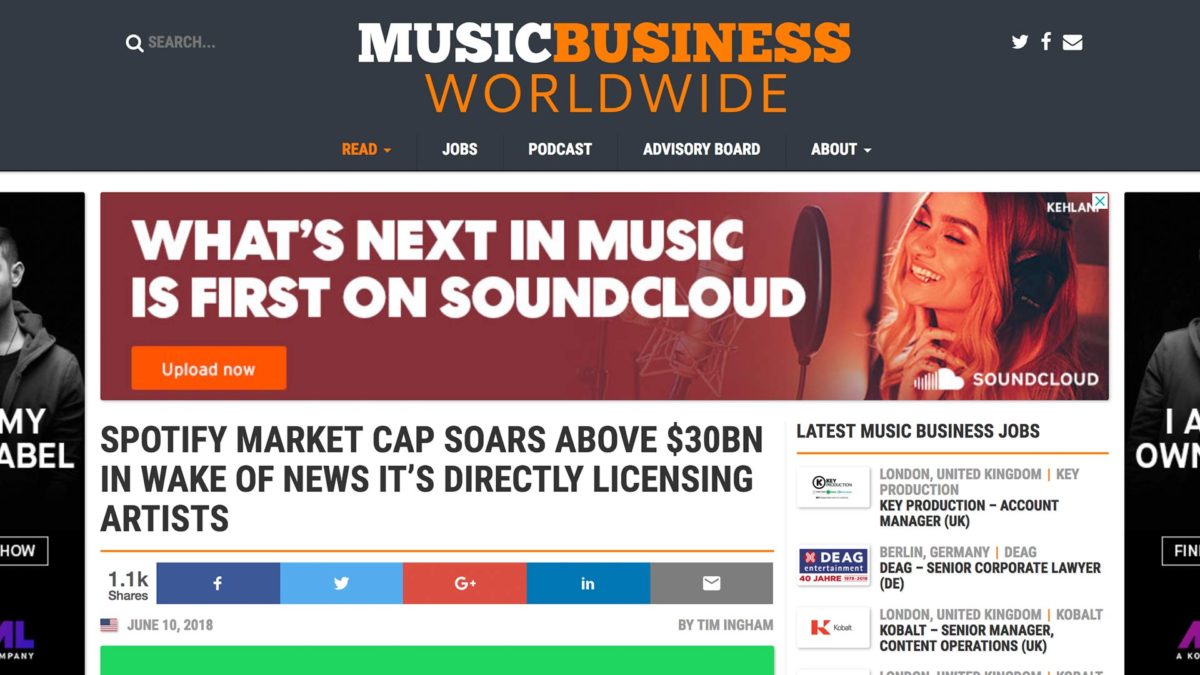 The below market summary, courtesy of Google Finance, shows how Spotify’s stock price consistently climbed in the eight trading days following Tuesday, May 29 – up to $171.48 at the close of last week. 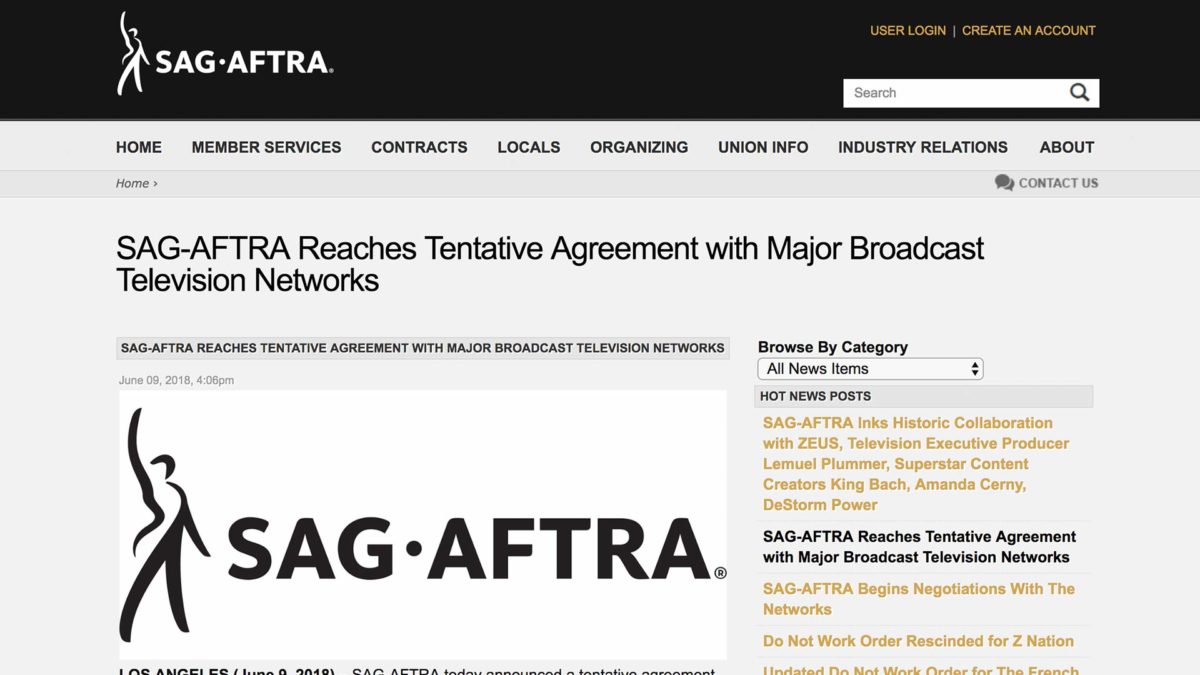 LOS ANGELES (June 9, 2018) – SAG-AFTRA today announced a tentative agreement has been reached with the four major television broadcast networks (ABC, CBS, NBC and Fox) and other producers on terms for a successor agreement to the National Code of Fair Practice for Network Television Broadcasting. 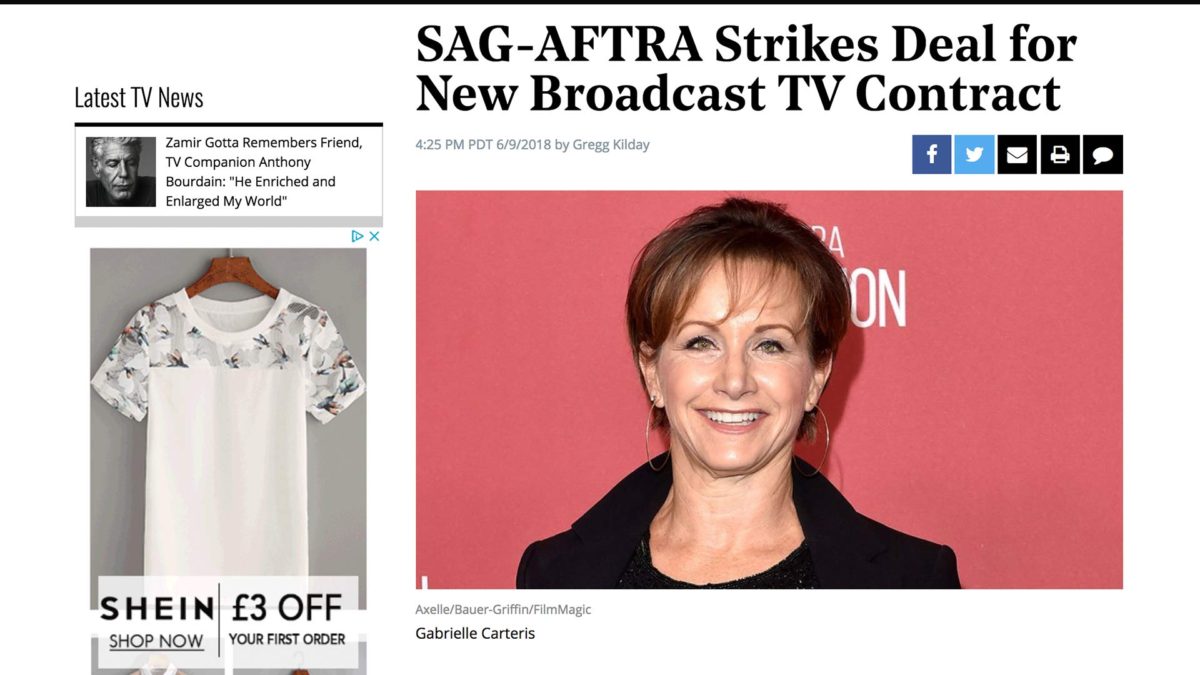 SAG-AFTRA on Saturday announced that it has reached a tentative agreement with the four major television broadcast networks — ABC, CBS, NBC and Fox — and other producers for a new contract, a successor agreement to the National Code of Fair Practice for Network Television Broadcasting. 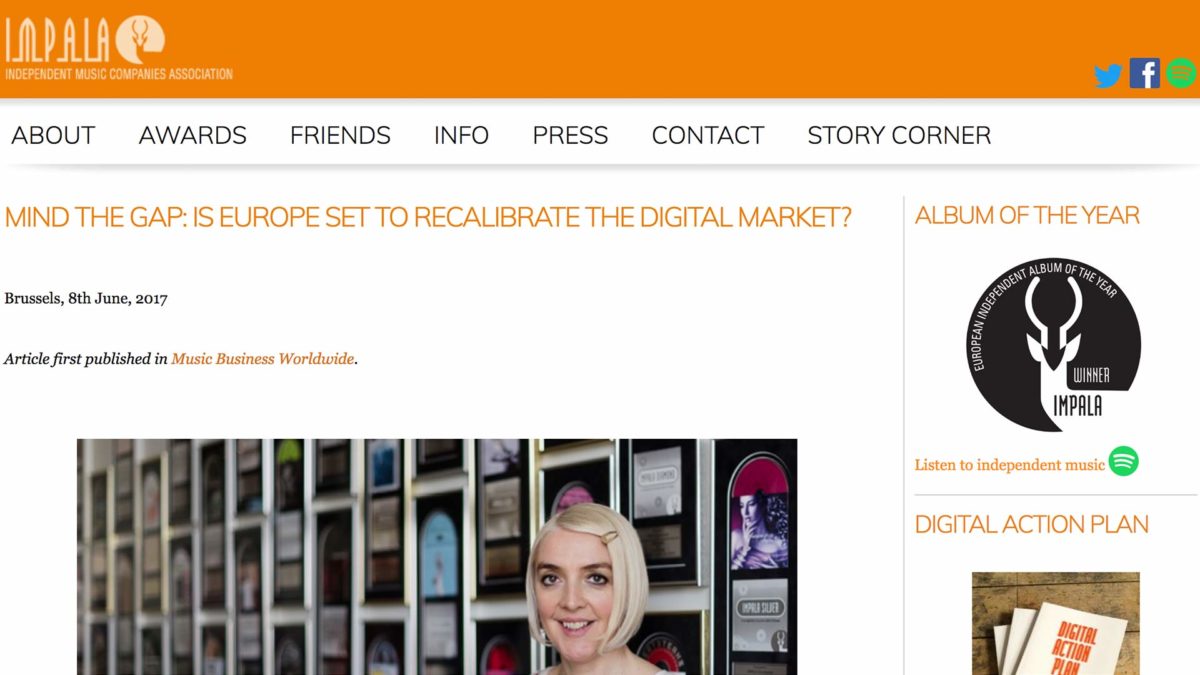 When we hear about the value gap, the discussion often focuses on licensing and money. Of course it’s about “value”, but it’s a lot more than that.

It’s about tackling the competitive stranglehold of incumbent online operators who want to hold onto the status quo – the biggest barrier creators and online start-ups face today. 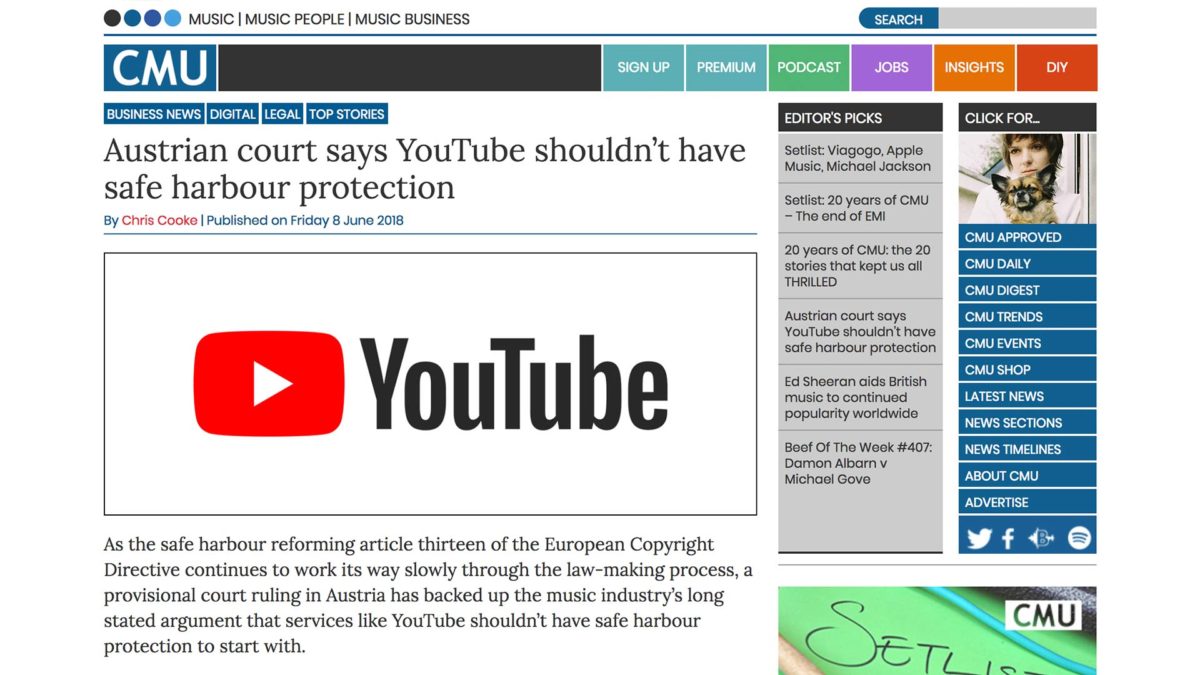 As the safe harbour reforming article thirteen of the European Copyright Directive continues to work its way slowly through the law-making process, a provisional court ruling in Austria has backed up the music industry’s long stated argument that services like YouTube shouldn’t have safe harbour protection to start with.

Representing more than 500,000 musicians, singers, actors and dancers, Fair Internet’s partners[1] have long campaigned for the fair treatment of performers in the digital world. 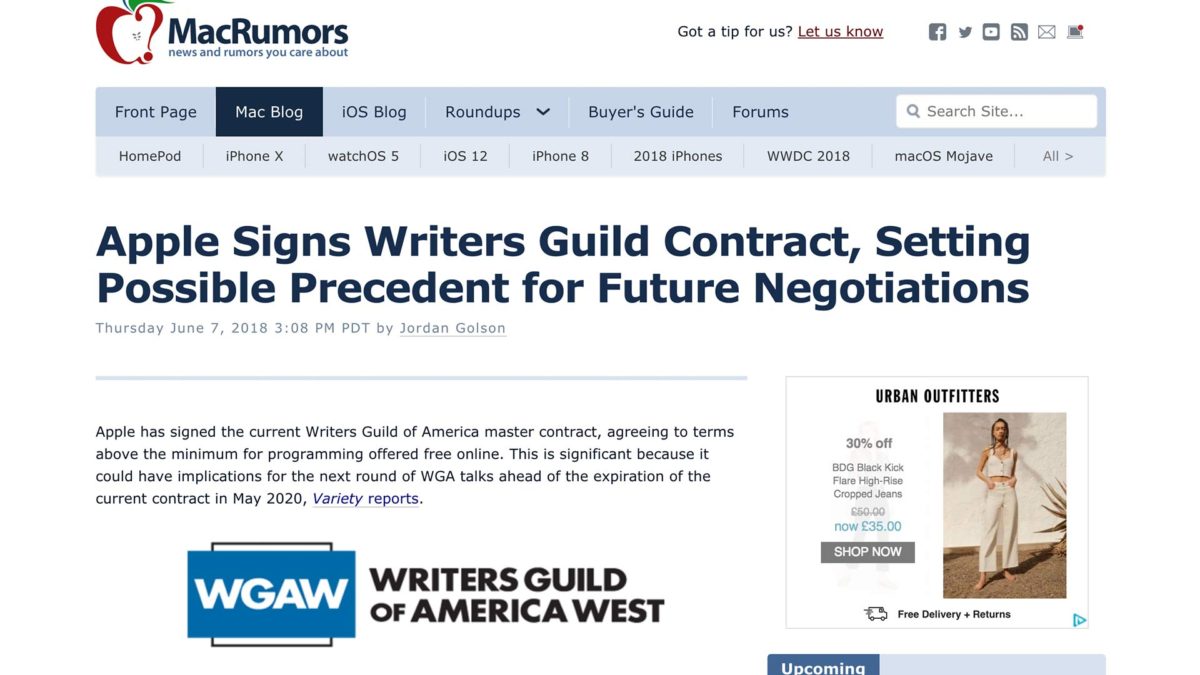 Apple has signed the current Writers Guild of America master contract, agreeing to terms above the minimum for programming offered free online. This is significant because it could have implications for the next round of WGA talks ahead of the expiration of the current contract in May 2020, Variety reports.