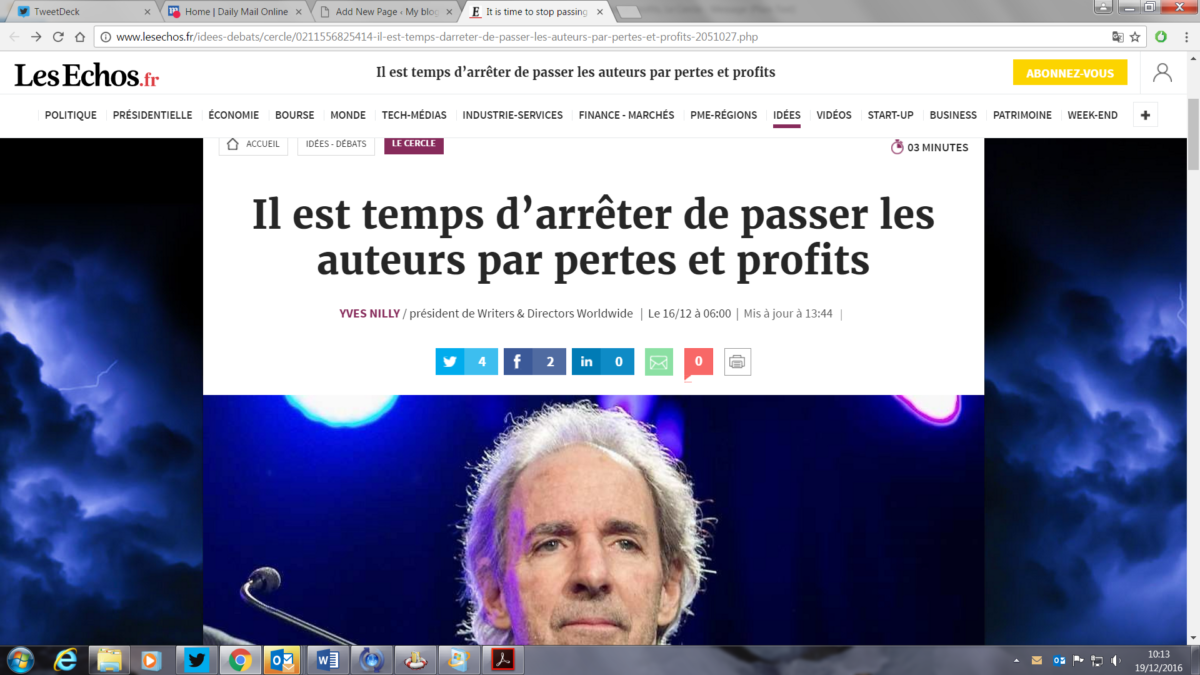 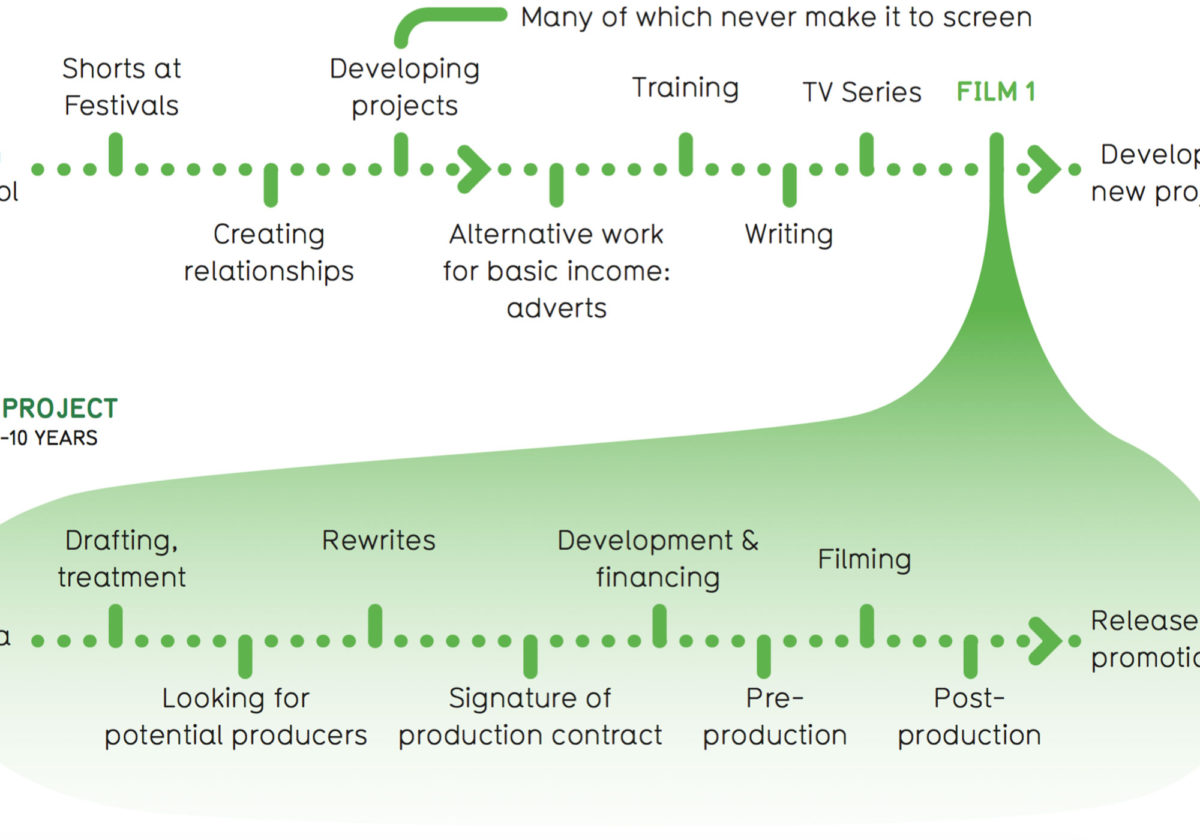 A useful illustrated guide to how audio visual authors are remunerated for their creative work and the gross imbalance in negotiating strength between authors and the broadcasters/entertainment industry. 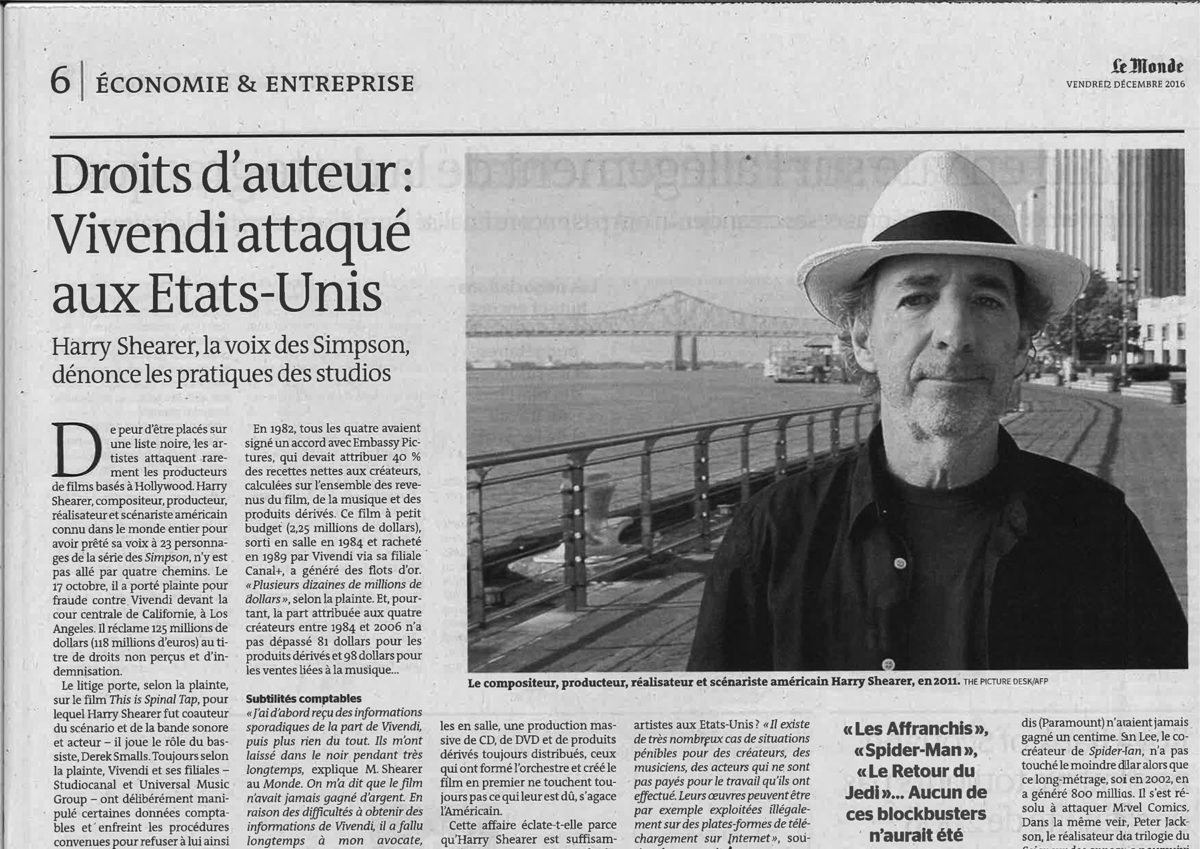 Creators Rights: Harry Shearer, known as the voice of The Simpsons, Fights Vivendi in the US

By filing a complaint against the producer, the American denounces the fraudulent practices of Hollywood studios over remuneration for artists.

For fear of being placed on a blacklist, artists rarely attack the producers of Hollywood films. Harry Shearer, composer, producer, Director and writer known worldwide for having lent his voice to 23 of the Simpsons characters, didn’t beat about the bush.
On 17 October, he filed a complaint against Vivendi in the Central Court of California, Los Angeles, accusing Vivendi of fraud and demanding $125 million (euros 118 million) for unpaid fees and compensation.

The dispute is, according to the complaint, about the film “This is Spinal Tap”, of which Harry Shearer was co-creator of the script and sound track and, as actor, since he played the role of bassist, Derek Smalls. According to the complaint, Vivendi and its subsidiaries—Studio Canal and Universal Music Group –have deliberately manipulated accounting data and breached agreed procedures, denying him, as well as his three co-creators of “This is Spinal Tap” – Christopher Guest, Michael McKean, and Rob Reiner – payment of rights.

In 1982, all four creators had signed an agreement with Embassy Pictures, to assign 40% of net revenue to them as creators, based on all of the income of the film, music and derivative merchandise products.
This low budget ($2,25 million) film, released in 1984 and bought by Vivendi in 1989 through its subsidiary Canal Plus, has generated waves of gold. “Tens of millions dollars” according to the complaint. And yet, the amount assigned to the four creators between 1984 and 2006 was $81 for related merchandise and $98 for music-related sales…

The studios ‘in position of strength’

After two worldwide releases, a huge number of CDs, DVDs and other derivative music sales which are still being distributed, those who created the band and who first released the film still have not earned what is owed them. This annoys the American.
Has this case been issued because Harry Shearer is sufficiently well-known and so does not run the risk of being banned by the studios? Does it expose an unknown systematic plundering the rights of artists in the United States? “There are very many cases of painful situations for artists, musicians, actors who are not paid for the work they have done. Their works can be for example illegally exploited on Internet download platforms”, says the creator.
M. Shearer is starting on a crusade for all artists tricked by the studios. “Hollywood, is rather a bubble of isolation” from which nothing filters through, according to him: “It’s a totally asymmetric system between the creators and the film studios. There are far more people who want to work than there are jobs. The studios, in a position of strength, know how to make use of this inequality”.

For Amanda Harcourt, accounting practices in Hollywood are often designed to minimize the proceeds of a film so that the studio is not obliged to pay out a percentage of the profits. As well as corporations avoiding paying taxes in some countries, the income of certain subsidiaries can be aggregated so that some costs are absorbed within revenue streams. The different positions between operations, derivatives or distribution are shared out so that the film is never profitable.

‘Goodfellas’, ‘Spider-Man’, “Return of the Jedi”… None of these blockbusters were profitable. Among the victims of these accounting subtleties, Series VI of Star Wars, Return of the Jedi, which “has never been profitable”, according to its producer even though the film has earned $500 million revenue, just like Harry Potter and the Order of the Phoenix, which officially lost $170 million, explains Harry Shearer’s lawyer. In the same way, Martin Scorsese’s Goodfellas (Warner Bros.) or John Landis’ Coming to America (Paramount) have never made a dime.
Stan Lee, Spider-Man’s co-creator, did not earn a single dollar whereas the film, released in 2002, generated $ 800 million. He decided to sue Marvel Comics. In the same vein, Peter Jackson, the Director of the Lord of the Rings trilogy, sued New Line Cinema.

Many groups who are not from the world of cinema, like Sony, Rupert Murdoch or Vivendi, have invested in Hollywood, with “making a fortune” in mind. This was not always the case. But Hollywood accounting has generated far more profit for businesses than for the creators. Shearer claims “It’s a very favorable industry for producers”.

To the question “why am I seeking $ 125 million?”, Harry Shearer replies that “this figure is related to the assessment of the receipts due but not paid and compensation”. “This is serious; “I wouldn’t lodge a claim for $5! Vivendi, for its part, does not comment on pending litigation.